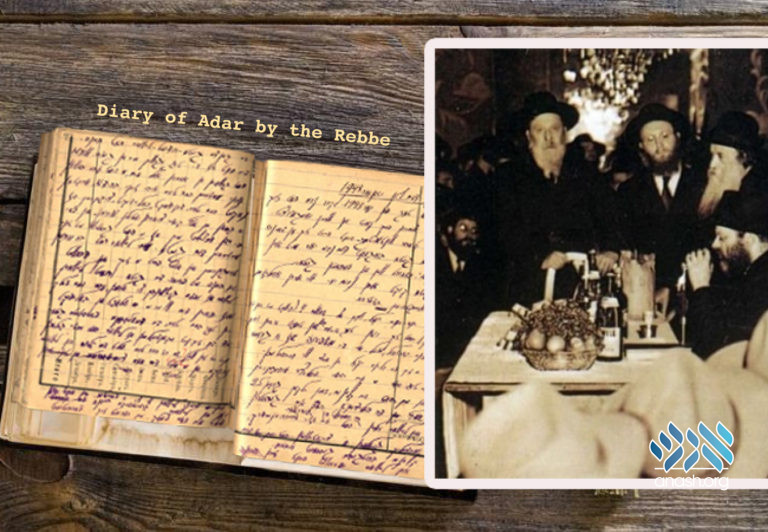 The Derher is proud to present excerpts extracted from the diaries of three bochurim who were in 770 in the year 5746, setting the scene and transporting the reader back to that time.

Rabbis Meir Yechiel Hershkowitz, Mordechai Mishulovin and Hirshel Raskin were three bochurim who were in 770 during the year 5746. They kept a journal describing the exciting daily events and a fraction of the many special interactions that were a constant occurrence in and around 770 in those precious years. This article covers the month of Adar I.

From the joyous farbrengens to the serious conversations with politicians, from the group of Baale Batim who came from Lyon to the simple individuals who were making strides in their Yiddishkeit and visibly gave the Rebbe so much nachas; the reader is swept along into the magical energy that living with the Rebbe brings into every single day.

Despite the heavy tensions hanging in the air (the final court sessions regarding the sefarim were about to be held) The Rebbe instructed individuals and the Chassidim in general to maintain a joyful attitude and many a farbrengen lasted until the morning!

“As the Rebbe made his way out of 770 after Maariv, the Chassidim weren’t singing. When the Rebbe reached the entrance of 770, he turned around to the bystanders and lifted his hand in gesture, “M’zol machriz zain az s’iz chodesh Adar!— An announcement should be made that it is the month of Adar!” The crowd immediately began to sing “Didan Notzach” as the Rebbe repeatedly encouraged the singing with his hand. The Chassidim went as far as dancing outside. The dancing continued in the upstairs zal as well as downstairs for many hours.

“It seems that the Rebbe will be going to the Ohel tomorrow. In addition, there will be a final hearing in the court tomorrow regarding the sefarim case. The lawyers from both sides will summarize their points of view to the judge.

The now famous story of the Rebbe refusing the gift of a new car happened during that time, and to hear it from first hand witnesses adds a whole new dimension.

“As the Rebbe exited 770 on his way to the Ohel this afternoon, a new car was brought to 770 for the Rebbe to use. The car is modern and up to date, with the interior custom-made for the Rebbe. Many bochurim and anash who heard about the new car assembled in front of 770 to witness the Rebbe using it for the very first time, and Chaim Baruch Halberstam was waiting with his camera to film the moment.

The Rebbe came out of 770 and distributed tzedaka to the many children who stood nearby. As the Rebbe neared the new car, he turned to Rabbis Groner and Krinsky and asked, “What is this?” Rabbi Krinsky told the Rebbe that this new car was given to the Rebbe as a gift. The Rebbe responded, “It says ‘Soneh matanos yichye—He who despises gifts will live.’ I would like to use the same car that I used yesterday,” and he motioned that the new car should be moved aside.

Rabbi Krinsky ran to get the old car, which was parked nearby, while the Rebbe waited on the sidewalk. The Rebbe’s face held a very serious expression and he did not signal at all to sing. When the old car arrived the Rebbe asked Rabbi Groner, “Is this the car in which I traveled yesterday?” before entering the car which drove off to the Ohel.”

To read the full article, which includes within it how the Rebbe commemorated the Rebbetzin’s birthday, the cryptic and hopeful exchange between the Rebbe and Israeli Knesset member Professor Avner Shaki regarding Mihu Yehudi and the Rebbe’s appreciation and hishtatfus in the many siyumei harambam around the world, click here.

This article is just one of the thousands of articles that have been researched, produced and published by The Derher in an attempt to strengthen the hiskashrus of it’s thousands of readers and give them a chance to ‘Live with the Rebbe.’ help them continue this work by participating in the Derher Raffle.

Visit Raffle.Derher.org for more information and to purchase tickets.