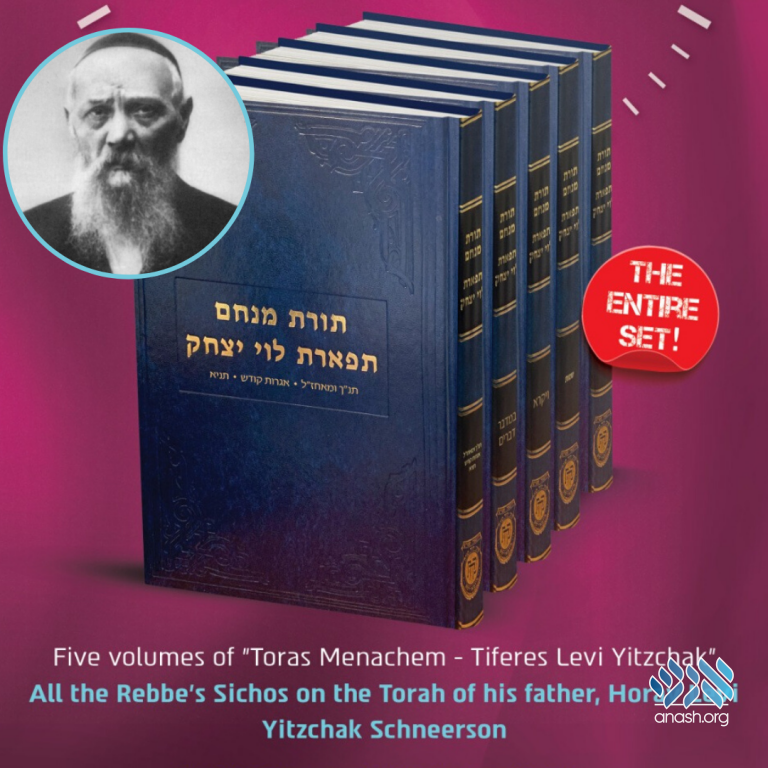 “I would like to make a wish that I will see the publication of the letters of my husband,” Rebbetzin Chana wrote in her diary. Now a set collecting all of the Sichos on Reb Leivik’s Torah has been newly published and is available for a nominal price.

The recent decade has seen the phenomenal discovery of Rebbetzin Chana’s diary, which was printed and translated into five languages (from the original Ukrainian Yiddish) by the team at Lahak Hanochos, under the auspices of Kehot. In addition to its fascinating revelations about the Rebbe’s childhood and about Horav Levi Yitzchak’s imprisonment and exile, it also revealed to us — for the very first time — the exact date of their wedding.

Rebbetzin Chana wrote the following entry on 11 Sivan 5712 (installment 34): “I recorded this date here, but wrote nothing else. It was 52 years since my wedding. There was something on my mind prompting me to pen some recollections, but I didn’t actually do so.”

A year later, on 11 Sivan 5713, she again marked the day in her diary (installment 35): “It is 53 years since our wedding. These years have been a time of great upheaval, both collectively and individually… My son—long may he live—has just left my apartment. This gives me life for the 24 hours until tomorrow’s visit, G‑d willing.”

In this entry, the Rebbetzin shares something which bothered her:

“I would like to make a wish that I will see publication of the letters of my husband, of blessed memory, which are extant. Something ought to be published from such a personality, such a flowing “wellspring” of incessant Torah thought, never ceasing even a moment, who, when he had no one to address, would write down his thoughts on paper in installments.

“Certainly I am entitled to hope for this, after all that I have witnessed in my life. In any event, it is something that ought to come about. I can do nothing to help it happen, but my desire for it is strong and I hope it will happen.”

Ultimately, the Rebbetzin didn’t see the fulfillment of her wish during her physical lifetime, before her passing on 6 Tishrei 5725 (1964). But it did occur several years later. On Chof Av 5729 (1969), the twenty-fifth anniversary of his father’s passing, the Rebbe instructed to begin the publishing of the Torah thoughts which his father penned on the margins of the Zohar and Tanya which Rebbetzin Chana had brought along to his place of exile.

During that time-period, fifty years ago, the Rebbe began to explain a segment of his father’s teachings at every Shabbos farbrengen. Some thirty years ago, the team at Lahak Hanochos began to collect all of those explanations and organize them according to the order of the Torah. With the Rebbe’s approval, this project merited the name Toras Menachem — Tiferes Levi Yitzchak. This marked the first time the Rebbe permitted a Sefer to carry his name.

In recent days, as we mark Horav Levi Yitzchok and Rebbetzin Chana’s 120th wedding anniversary, the full set of Toras Menachem — Tiferes Levi Yitzchak has appeared for the very first time, spanning the entire Torah, Tanach, Shas, Zohar and Tanya. In honor of the new printing, the Seforim are available on a one-time basis for a fraction of the regular cost (just $30) on lahak.org/sale or by telephone from Kehos in Kfar Chabad at 03.9606.018.

Shipping is available throughout the United States and Eretz Yisroel, and the Seforim will also be available for pickup at Kehos of Kfar Chabad and in Crown Heights in 2 weeks. Special organized shipments will be sent out to Anash communities worldwide: Melbourne, Sydney, Toronto, Montreal, Paris and London.

The sale is limited to ten sets per purchase. Order today! http://lahak.org/sale