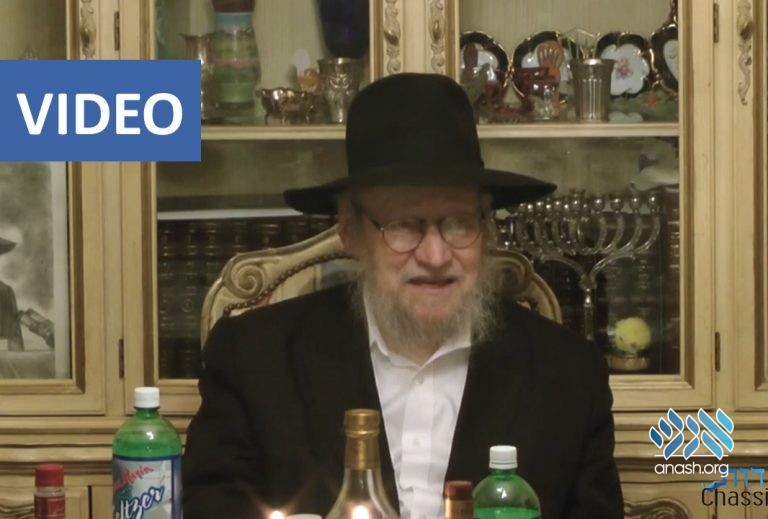 Watch: A farbrengen with Harav Ahron Yaakov Schwei where he spoke about his childhood, the mesirus nefesh of his parents, stories of chassidim in Samarkand, and more.

A video of a special farbrengen with Harav Yaakov Schwei, whose shiva concluded yesterday, was just released.

The farbrengen, which took place in Boro Park, is full of fascinating memories from his own youth. He shares the story of how his widowed mother sent off his brothers and himself to Samarkand so that they could learn Torah.

He then tells of his brother’s mesiras nefesh so that his younger brother Yankel could learn Torah. His older brother who had arrived earlier (it is unclear if it was Aizik or Boruch Sholom), was lucky enough to have a bench in the shul to sleep on, and he had secured a daily meal at a local family. When the younger Yankel arrived, his older brother gave him both the bed and the meal, and he went to look for another source for his basic needs.

He spoke of his father and his connection to the famed rabbonim of Dvinsk – R. Meir Simcha Hakohen, the Ohr Sameiach, and R. Yosef Rosen, the Rogotchover Gaon.

Special memories come from the time he spent in a DP camp Poking, Germany, along with many legendary chassidim. He recalls the kindheartedness of Reb Yisroel Neveler and his heartfelt davening, from which R. Schwei sings some nigunim.

The proper method of learning – including remembering the Giver of the Torah – and the importance of learning the daily Rambam are some of the practical messages he shared.