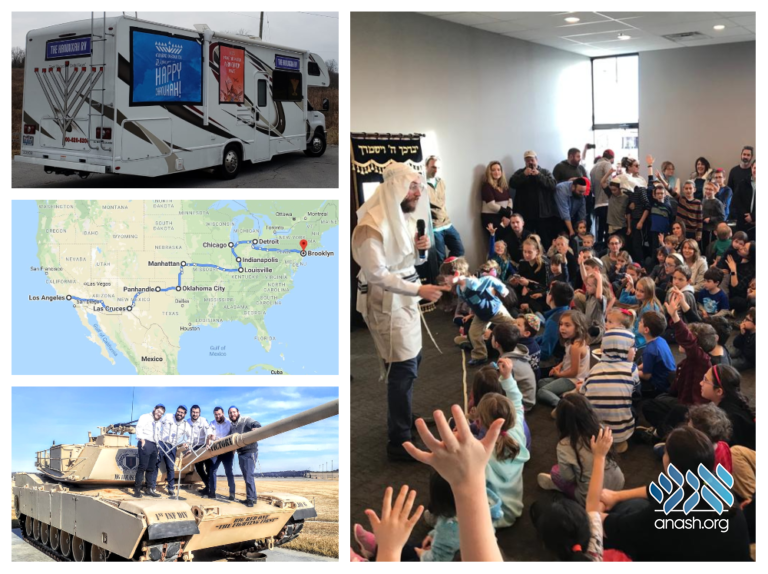 The story of five young Rabbis that spent their Chanukah roving the states.

“We couldn’t abandon our own,” Wolfman explained. He’s referring to the many American Jews that live far from anything Jewish. “So many American Jews live in rural America. Even if they have celebrated Chanukah in the past, it’s most likely their children haven’t.”

For the past few years Shneur Wolfman, Avraham Drizin, Ari Dalfin, Mendel Kalmanson and Mendel Winner have been traveling the globe, serving small communities that have no permanent Rabbi or organized synagogue. Most recently, Drizin and Winner hosted a Passover Seder in the Himalayas. Wolfman spent his summer in Peru providing Shabbos meals for the locals. Dalfin taught Torah classes to Jews in small towns off the African coast and Kalmanson volunteered as a cantor in Kazakhstan.

“There was a common thread we saw in all our travels,” Wolfman continued. “Whether giving Chanukah stickers to a young girl in Utrecht, helping an Iquitos native pray for a loved one or lending an ear to a lonely backpacker in Kathmandu. An isolated act of kindness has tremendous positive consequences. A single gesture of love touches the soul. Visiting and lighting the Menorah in a house, where being Jewish only means not getting presents from Santa, changes the game.

“Our experiences were so powerful. I felt we needed to go out and do the same for the Jews in our own country. It was due time to service those living in our own backyard.”

“Traveling the world is fun,” Winner said. “But as a proud American, bringing joy to a Jew in Midland, TX or celebrating Chanukah with the people in Las Cruces, NM is priceless.”

Kalmanson added, “We live by the motto ‘never make small plans’. Having a real impact on a single individual is no small plan. It may not make national headlines but it means the world”.

The five planned ambitiously. Their goal was to reach as many Jews as they could in rural America. They spent eight days living in a Chanukah themed RV. During the day they visited Jews and at night they traveled. They brought along Chanukah gifts, menorah kits and lots of chocolate gelt. They took a five-foot Menorah with them for public Menorah lightings and prepared an interactive Chanukah play.

Here is an outline of their extraordinary travels.

Wednesday, December 18 – Shabbos, December 21:
They started their journey in Long Beach CA with a launch party.
The next evening the Hanukkah RV rolled out of greater Los Angeles, eastbound in search for forgotten members of the tribe.
On Friday morning, while driving through Historic Route 66, the Rabbis took a random stop at a gas station bordering an Indian reservation. When the cashier saw the Hanukkah RV, she told them about her Jewish nieces living 90 miles away and how they had made up to meet that Sunday. The Rabbis gave her Menorahs and gelt for her nieces, making sure they can celebrate Chanukah in Arizona’s far out Northwest region.
They got to Flagstaff for Shabbos, where they spent time with the close-knit Jewish community and their warm Rabbi.
Right after the Shabbos went out, they continued driving on Route 180 through Gila National Forest. They finally reached Deming, New Mexico on Sunday in the early afternoon.

Sunday, December 22:
Near the glistening white sands of the Chihuahuan desert in New Mexico is a small town called Deming. There are two very special Jewish families living there. The Hanukkah RV first visited the Holtzmans, an older couple in love with nature and dogs. There, they spoke of the different Jewish cultures and traditions and sang spirited Chanukah melodies together.
They later visited Elinor and her two young boys. They were so shocked when the Hanukkah RV pulled up in their driveway. There had never been any signs of Jewish life in their sleepy town, let alone to this extent. The Rabbis wasted no time, they got a Mezuzah on the front door and taught the little ones how to play dreidel. For the Rabbis, it was just another stop on the way, but for the Jews of Deming it was an unforgettable encounter.
That evening, the Rabbis celebrated with the Las Cruces community. Five hundred people came to the annual Chanukah concert in the center of town. The Hanukkah RV was a big attraction at the event, many people came on to play a game of dreidel or just to shmooze with the Rabbis. Jeff Steinborn, a member of the New Mexico state senate, also hopped on the Hanukkah RV to put on tefillin. Celebrating the first night with so many proud Jews far away from the big city and its distractions was tremendously elating.

Monday, December 23:
Lubbock, Texas is a big city with a prestigious University and many big industries. A lot has gone down in Lubbock, yet a public menorah lighting ceremony had never happened. There had never been in Lubbock a Jewish celebration in a public arena, where Jews could display pride openly and unabashedly. The Hanukkah RV team worked tirelessly with the community and South Plains Mall to create a Chanukah bash that Lubbockians had yet to dream of. With close to a hundred people in attendance, there were hot potato latkes from L.A, DIY Menorah crafts from N.Y, lots of gelt, Menorah kits to bring back home and a Menorah lighting ceremony. It was the first ray of a bright strong Jewish future in Lubbock.

Tuesday, December 24:
Hutchinson, Valley Central, Newton and Wichita are some of the cities in Central Kansas where the Hanukkah RV stopped on Tuesday. A Jewish family from Michigan, living in Valley Central, explained to them the contrast between life in Michigan to the way it is in Kansas. In Valley Central, the people are lovely but there’s no one that gets the schmooze. After hours of going through all of the topics Jews can discuss, Lisa told them that Hanukkah RV’s surprise visit is a wonderful Chanukah memory that their family will always cherish.

Wednesday, December 25:
“No mission too hard, no sacrifice too great, duty first” is their motto. The first infantry division is located in the centermost point of the U.S. They are there to be able to respond immediately to any attack on American soil, from any direction. Military families there live on the edge. Many fathers are either about to be deployed or had just come back from an overseas deployment. This Chanukah, the active servicemen and their families on Fort Riley received a special Chanukah treat. The Hanukkah RV rolled in with special Chanukah gifts for the kids and a traveling dreidel game room. The soldiers deserve so much for what they do. Bringing joy to the base is the least Hanukkah RV can do to say thank you. After spending time on the base, Hanukkah RV moved on to Kansas City. There the Rabbis put on an interactive Chanukah play for Jewish kids from all backgrounds.

Thursday, December 26:
Sedalia, Missouri has a population of 21,000, but only 0.004 percent is Jewish. Robert is the only Jew in the whole city. Although he is very proud of his traditions, in his circumstance it is quite difficult to practice them. He had been dreaming of putting a Mezuzah on his home, but was never able to get ahold of one and didn’t know how to install it. The Hanukkah RV made an unexpected stop at his house. There they installed the first and only Mezuzah in the whole city of Sedalia and gifted him with his own pair of Tefillin. This visit was one of the highlights of the Rabbis’ trip. They saw a Jew living so far, without any of the opportunities many take for granted, holding strong and remaining spirited. Then they traveled to Chesterfield. They hosted a public Menorah lighting at Schnucks and visited members of the local Jewish community.

Friday, December 27 – Shabbos, December 28:
The capital of Kentucky is Frankfort. It is a small charming city on the shores of the Kentucky River. The Hanukkah RV stopped there Friday morning. They came to visit the three Jews living there. Through the grapevine (meeting a 70 year strong Frankforter, stopping at a wine shop and a visit to the state capital building) they learned of three additional Jews living in the area. The Rabbis surprised these, ‘off the radar Jews’, with Chanukah gifts. It was truly unusual for quiet Frankfort.
That Shabbos, they stayed at the home of Rabbi Chaim Litvin, known famously as the Bourbon Rabbi. There they shared insights and gathered energy for the last leg of their journey.
Shabbos was over and Chanukah was just about finished, but the Rabbis had a very important task. That Saturday night they visited Kentucky State Reformatory and FMC, two prisons in the state of Kentucky. They went to bring light to people that were going through a dark period in life. Seeing the Jewish inmates hopeful and positive reaffirmed the tenet, that at the core, every Jew is inherently good.

Sunday, December 29:
The five spent their Sunday in Indianapolis, Indiana. Their day looked something like this: Minyan, Torah class, Chanukah gifts at Fashion Mall, interview by Fox 59 and Hanukkah RV tours downtown. Then, they headed off to Munster, Indiana for the last public Menorah lighting of 2019.

They continued their journey stopping in Chicago and Detroit.
Finally on January 1, 2020, they got back to New York.