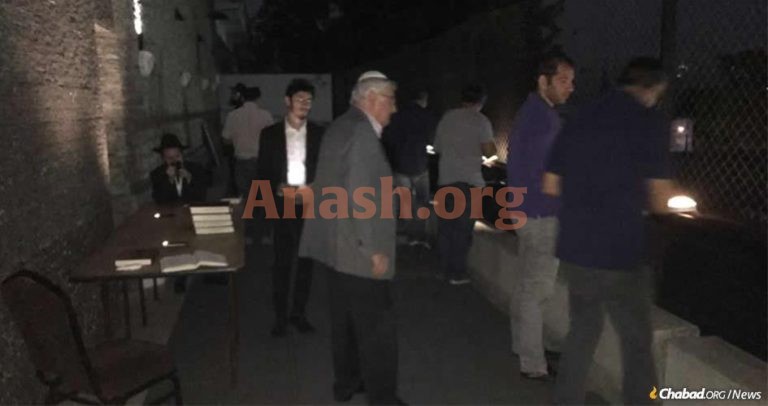 It’s been around 10 days since the last citywide electricity outage in Caracas, Venezuela, and the lights are back on … for now.

“Obviously we’re hoping that holds for Pesach, and especially the seder nights,” says Rabbi Yehoshua Rosenblum of Chabad-Lubavitch of Venezuela. “This has been a significant challenge.”

Amid all this uncertainty, the Venezuelan Jewish community has been preparing for Pesach. Jewish communal institutions have brought in a full container stocked with Passover needs, including matzah, wine and other items. Additional matzah has also been imported from abroad, some via private shipping companies and some in the suitcases of students returning home from places where it’s more easily available.

Come Pesach, a public community seder will take place at the Chabad center, which is located on the city’s east side, where the majority of the Jews in Caracas live. Of course, they’re stocking extra candles in case they are needed on the holiday.

Intermittent electricity outages have recently become a part of daily life in the South American country, but some last longer than others, including a multi-day blackout that began March 7. Electricity does not only affect lights; it also means losing cell-phone service and Internet access, subway transportation, and perhaps most importantly, water. Most water in the capital is held in each building or home’s own water tank and then electrically pumped into faucets.

“We began Kabbalat Shabbat a few weeks ago and the lights went out, and we continued praying in the dark through song and memory,” says Rosenblum. “But it’s not just in our building; it’s the whole city. Street lights, neighboring buildings. It’s eerie, like the plague of darkness in Egypt which we’ll recall at the seder.”

School has been impacted as well.

“During the month of March, when teaching about Purim and Pesach is a central part of any Jewish school’s curriculum and experience, we only had eight days of formal learning due to the blackouts,” explains Goldie Slavin, director of the Ohr Chabad Jewish Day School in Caracas. “Legally, schools had to be closed, but we continued classes informally in private homes and at the synagogue.”

Other aspects of Jewish life are affected when electricity outage hits, such as the mikvah, which is crucial to the observance of Jewish family purity. But the Jewish women of Caracas were undeterred.

“It was extremely inspiring to attend to the mikvah during these blackouts,” says Rosenblum’s wife, Chani. “There was not a car in sight. We used flashlights to light up the area, but the women were committed to fulfilling this precious mitzvah.”

Desperate Need for a New Generator

During previous rolling blackouts, some refrigerated kosher food had to be thrown away. Before Pesach, they’ve been putting a special emphasis on purchasing non-perishables. Still, generators, which are expensive and difficult to obtain locally, are now a desperate need for the Jews of Venezuela.

Chabad, which was founded in Venezuela in 1975 when Rabbi Moshe and Chaya Perman were sent to Caracas by the Rebbe, is now in the process of purchasing and shipping in a massive generator for the synagogue and center, for which funds are still being raised. The center includes the mikvah and other facilities that would be powered by the generator.

During the worst of the outages, Hebraica, Caracas’s Jewish social sports club, was a refuge for many because it has its own large generator and could give people a much-appreciated place to gather, shower and recharge their devices.

“The community leaders had real foresight in installing the generators,” says Rabbi Rosenblum. “It was beautiful to see people have this place where they could go for all these necessities. Just seeing others in similar circumstances—that feeling of support that comes from being together and knowing you’re not alone—was a huge help to everyone.”

The worsening scene in the country affects everyone to varying degrees, and the rabbi says he is constantly getting requests for assistance. Some need bare essentials; others need infusions for their business so they can continue earning a livelihood. Recently, he got a call from a friend asking the rabbi to make contact with relatives in the distant city of Maracaibo, once home to a large Jewish community but today greatly diminished, and where electricity is off most of the day, and life is far more difficult than in Caracas. Rabbi Yosef Slavin, another of the city’s Chabad rabbis, says he just received a request from a fellow Chabad rabbi abroad to send much-needed matzah to a Jew living in Valencia, about two hours west of Caracas.

Chani Rosenblum points out that the broader Venezuelan Jewish community stands united. When, for example, scarce or difficult-to-obtain medicines are required, community members put out the word across social media to find them, locally or abroad.

It’s not a secret that the Jewish community has diminished in size, but Jewish life in the country continues, as it must, as long as any Jews remain, says Rabbi Slavin.

“We want everyone to feel that we have a real Jewish community here; we’re not just in survival mode, we’re here to stay,” explains Rabbi Rosenblum. “As they say in Spanish, we’re not only here to sobrevivir [‘survive’], we’re here to vivir [‘to live’].”

To continue, though, help from abroad is needed.

“There was once a time when we didn’t have to ask for donations from outside of Venezuela,” he says. “Today, we need to.”

There’s a joke many Venezuelan Jews like to tell, one that no doubt will be recalled at the seder night when the words “Next Year in Jerusalem” are called out.

When Moshiach comes, the joke goes, we should go straight to Jerusalem—not via Miami.