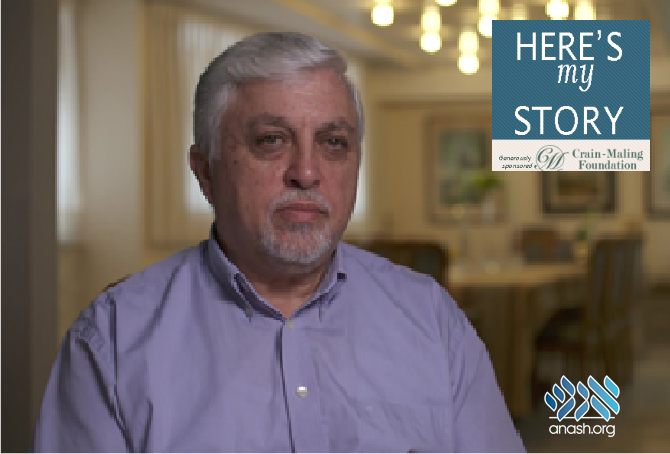 In my youth I had shown a strong talent for drawing, but, as a yeshivah student, I never had the opportunity to be exposed to the world of art. In fact, art was anathema in my eyes. This seemed to be the prevailing view in the schools where I studied – the Ponevezh yeshivah in Bnei Brak and the Chevron yeshivah in Jerusalem, where I also received rabbinic ordination.

But then I happened to be in Canada during a big art exhibition, and I saw amazing artwork there that fascinated me. And I asked myself: “Why don’t we utilize the incredible power of art for good? Why don’t those whom G-d has blessed with this talent use it for holiness?”

I spoke about this with several rabbis and learned that, according to the great sages of our generation, there is nothing wrong with art, as long as it stays within the boundaries of Jewish law, halachah. (That is, as long as it is not lewd or crude, does not attempt to represent G-d in physical form, or violate the commandment against making graven images.)

As a result, I decided to try to explain what I learned from the Torah in the symbolic language of drawing and painting, while being careful to stay within the halachic framework. And this is how I began to develop my style which gave new meaning to the notion of “Jewish art” as opposed to “Judaica.” I aimed not just to use Jewish motifs and symbols in decorative fashion but to convey emotion and a deep message in the Torah themes I drew.

The big challenge in painting Torah ideas is that the Torah is essentially spiritual, and every verse contains infinite depths of G-dly wisdom. The concern is that trying to convey this through painting might reduce the deep spirituality to something shallow or banal. Therefore, in my paintings, I attempted to express the same conceptual depth that is embedded in the verses without resorting to a purely historical scene.

The reactions to my artwork were very positive, and after two highly successful exhibitions in Israel, I was invited, in 1979, to exhibit in a place that I considered to be one of the most important in the United States – the Aberbach Fine Art Gallery on Madison Ave in New York.

During the preparations for this exhibition, a Torah-observant Jew who was an art collector entered the gallery, and the owner tried to sell him two of my paintings. He responded that he liked them, but said that he would only buy them if a rabbinic authority would judge them to be within halachic standards.

It just so happened that a Chabad chasid, a friend of the gallery owner, was on the premises and overheard the exchange. He offered to go to the Lubavitcher Rebbe and ask his opinion.

I gave the chasid a catalogue of my works, and he returned to report that the Rebbe very much enjoyed my paintings and said, “Thank you, thank you for the good news … I will mention this at the resting place [of the Previous Rebbe].” The chasid also reported that the Rebbe had said, “The time has come to correct the discipline of art.”

After hearing this, I very much wanted to discuss the matter further with the Rebbe. So, after some effort, I managed to arrange a private audience with him.

In that audience, the entire time that the Rebbe spoke with me, I couldn’t look into his eyes. He had such a penetrating gaze, and he looked at me with his head tilted forward a bit as if reading me. At the same time, I felt that he was embracing me with love. I can testify that I have met many important people, but I never experienced anything like this from anyone else, and this impression is alive within me until today.

The Rebbe told me that a talent for drawing or painting is a G-dly gift, and anyone who has been blessed with it must develop and utilize it to bring people closer to G-d. He added that I could not be satisfied with doing this by myself. “Many people have this gift, and you have an obligation to help them develop it in the right direction,” he said, instructing me to establish a school where I could teach people the art of painting in the Jewish spirit.

At the end of the audience the Rebbe blessed me with success and that I should report good news.

I had never attended an art school, and I certainly didn’t know how to establish one. To me, it seemed unrealistic that I could start such a school. So, initially, I dismissed this idea from my thoughts.

But, on the day of my return to Israel, I was invited to a klezmer concert where the Minister of Education, Zevulun Hammer, was present. He approached me and said, “Yossi, I’ve heard you are an artist. Why don’t you open a school?”

Like a bolt of lightning, the Rebbe’s directive stood before me. I replied that, yes, I’d be ready to open a school. He promised to procure the funding.

I began by first training teachers in my method, and later accepting students – young chareidi women – with a goal of helping them earn a decent living from their artwork. When we held an exhibition, the famed halachic authority, Rabbi Shmuel Wosner, came together with his family, which represented his approval for what I was doing.

We began modestly but grew very quickly. Within a year, we opened branches of the school around Israel, with the student population rising to more than seven hundred. And I remembered what the Rebbe had told me during my meeting with him. “Do not be like an ant, but rather like a spider. An ant does its job consistently and doesn’t stray from its path, but the spider spreads its web in all directions.” He had wanted me to think big, and this is what I tried to do.

With time, I realized that opening these schools was part of the Jewish mission of being a light onto the nations – and that is when I finally understood what the Rebbe meant when he said it was time to correct the discipline of art. For art to be a medium of “light,” it had to reflect the sanctity of the Jewish spirit, for only then could it reach Jews who are distant from their roots and re-awaken their souls. That is the real mission of Jewish art.

After fourteen years, I passed on the management of the schools to the teachers, but I continued to teach a select group of talented men and women. This I still do to this day, in accordance with the mission which the Rebbe set before me. I also continue to paint Torah ideas, and I feel the Rebbe’s blessing with me in every work that I complete.

Yossi Rosenstein is a contemporary artist who resides with his family in Bnei Brak, where he was interviewed in December of 2018.