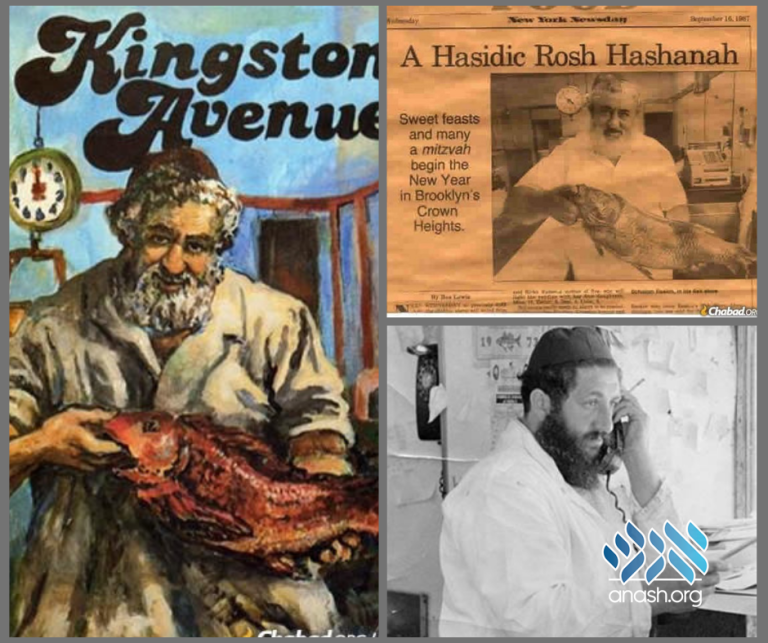 By Dovid Margolin for Chabad.org

Sholom Ber (Berel) Raskin, the kosher fishmonger who, glinting cleaver in hand, welcomed generations of customers, visitors and journalists into his pungent Crown Heights fish store and the Chassidic neighborhood he called home, passed away suddenly on Shabbat morning, May 25. He was 84, having spent 65 years living in the Crown Heights neighborhood of Brooklyn, N.Y., to which he arrived as an orphaned survivor of Soviet tyranny and Nazi terror, and where he eventually became an area icon.

A big, brawny, bearded man, the smiling Raskin was the picture-perfect Chassidic shopkeeper, happily living up to the role. Even years after his eponymous store had grown to include a full staff and massive wholesale division—becoming famous for its gefilte fish and seemingly endless flavors of herring—the elderly Raskin could regularly be seen through the windows behind the counter, sleeves rolled up and hands glistening, bringing a massive knife down upon an assortment of (kosher) fish.

To his regular customers—and there were many—the scene was just a decades-old slice of neighborhood life, but to visitors and guests from around the world it was an image of the Old World they could only read about in books or see on television. Journalists, too, could not get enough of the sight of the pious, Russian-accented Chabad-Lubavitchfishmonger “wiping his thick hands on his apron,” as The New York Times noted in a 1991 pre-Rosh Hashanah story, “and motioning to the streets outside.”

Raskin’s appeal lay in the fact that he was not a Hollywood invention but the real thing, the Chassidic embodiment of the American dream. Having survived the worst the 20th century had to offer, he arrived penniless in New York, where he settled near the Rebbe, of righteous memory. With simple faith and the Rebbe’s blessings, he went into a business he knew next to nothing about, toiled to make a living for his family and eventually built a successful business, all while remaining faithful to his Chassidic roots and education.

Raskin, seen here in his store circa 1972, was born in the Soviet Union and his father died in the Nazi siege of Leningrad during World War II. His family escaped the USSR in 1946 and eventually settled in Crown Heights, where he opened his fish store in 1961.

“I used to work very hard,” Raskin explained in a 2013 interview. Working himself in those early days, he would often wrap up his store orders at midnight before heading in his truck to the fish market to be there when it opened in the wee hours of the morning. He’d buy what he needed, return to Crown Heights and start the next day anew. “I had such strength back then …, ” he said.

But his biggest pride was his family—many of his children and grandchildren serve as Chabad emissaries around the world—and the fact that he supplied fish to the Rebbe and his wife, Rebbetzin Chaya Mushka, including for Passover.

“On erev Pesach, I used to call up the Rebbetzin … and tell [her] that I had new knives and a special machine, only for the Rebbe,” Raskin recalled, explaining the lengths to which he went in order to ensure the highest grade of kosher for Passover for the Rebbe. “You know what she used to tell me? ‘Mr. Raskin, mein man farlozt af eich. Why do you have to tell me? [My husband] relies on you.’ ”

Sholom Ber Raskin was born on June 28, 1934 (16 Tammuz, 5694), in the city of Leningrad (today St. Petersburg), the Soviet Union, the second of R’ Aaron Leib and Doba Raiza Laine’s four sons. His parents both stemmed from Chabad Chassidic stock, his father being a descendent of the renowned R’ Peretz Chein (1797-1883).

By the time Raskin was born, Communist authorities had done a thorough job decimating Jewish life and learning throughout the Soviet Union—an era when synagogues, yeshivahs and mikvahs were forcibly confiscated and destroyed. Stalin’s purge of the Communist Party and widespread middle-of-the-night arrests began when Raskin was three. Despite the suffocating atmosphere of terror, Raskin’s father remained a faithful Jew and Chassid, maintaining his beard throughout. R’ Aaron Leib, who had a melodious voice and often served as chazzan and Torah reader in Leningrad’s underground minyanim, was also a gifted mechanic who used his skills to assist his fellow Chassidim in their work.

At the age of six, just before the outbreak of World War II on the eastern Soviet front, Raskin and his brothers left Leningrad with their mother for the city of Gorky (Nizhny Novgorod), where they remained once Hitler invaded the Soviet Union in violation of his treaty with Stalin. His father died from hunger during the German siege of Leningrad.

“He was buried in a mass grave,” Raskin said. “My dream now is to go back to say kaddish.”

In Gorky, the family lived with their maternal grandfather, a devout Lubavitcher Chassid. With no choice of a Jewish school, legal or illegal, the boys were sent to a Soviet state school, which Raskin attended for four grades.

“I had an uncle; he told my mother, you’re sending your children to shkola [school], what will be with them? They’ll become non-Jews,” recalled Raskin. “You need to send them away to yeshivah.”

His mother listened and sent her young boys to Samarkand, Soviet Uzbekistan, where a Chabad refugee community had formed and established synagogues for themselves and makeshift schools and yeshivahs for their children. Raskin recalled that his melamed in Samarkand was R’ Berke Chein. Later, he studied at the yeshivah in Tashkent (which had a similar refugee community) under R’ Chaim Meir Garelik.

With the conclusion of World War II, Chassidic community members in Uzbekistan found themselves wondering whether they should attempt to make a break for it and flee, or remain in the Soviet Union. That’s when, as Raskin recalled it, a rumor spread that the sixth Rebbe—Rabbi Yosef Yitzchak Schneersohn, of righteous memory, who had escaped from Europe and settled in New York in 1940— had said ich vil zehn meine einiklach—“I’d like to see my grandchildren.”

Largely for this reason, a huge portion of the Chabad community in the USSR decided to seek ways to leave. At the time, 1946, the Soviet Union made an allowance for Polish citizens who had ended up in its territory during the war to be repatriated back to Poland. Taking advantage of this momentary loophole, about 1,000 Lubavitcher men, women and children escaped the country using forged or illegally purchased Polish identity papers.

The family spent three months in Lemberg (Lvov, the Ukrainian gateway city to the West) before obtaining Polish papers made out to their mother’s maiden name, which Raskin continued to use for the rest of his life. They left the USSR by train, making it first to Czechoslovakia and then on to a Displaced Persons’ camp in Wegscheid, on the outskirts of of Linz, Austria.

The Wegscheid DP camp was known for being overcrowded, with poor food quality and supplies; nevertheless, a semblance of Jewish community life bloomed. The Raskin family spent a year and a half languishing in the camp, where the boys attended a cheder. Raskin would later recall walking an hour on Shabbat mornings to immerse in the mikvah in Linz. From there they moved to France, living in the Parisian suburb of Brunoy, where Raskin and his brothers attended the newly founded Lubavitcher yeshivah.

In 1949, the sixth Rebbe established the Chassidic village of Kfar Chabad in Israel, and the majority of Russian Lubavitcher Chassidim in Europe were directed to settle there. Raskin’s widowed mother wrote to Rabbi Yosef Yitzchak asking where she should go, and he responded that their place was in America. For the next five years, they struggled to obtain the visas to the United States before finally sailing for New York in 1954.

The Raskins first lived in Brownsville before settling in Crown Heights. The fatherless Raskin boys received special care and attention from the new Rebbe, Rabbi Menachem M. Schneerson, who assumed leadership of the Chabad movement following the passing of his father-in-law, Rabbi Yosef Yitzchak, in 1950.

In July 1958, Raskin had a private audience with the Rebbe for his birthday, during which he sought a blessing for his engagement to Esther Lipskier. The Rebbe concurred with the marriage prospect before making a request:

When Raskin asked for the Rebbe to officiate at his wedding, as he had done earlier for his older brother, the Rebbe told him: “If you do what I ask of you, I’ll do what you ask of me.” Raskin agreed, and seven months later, the Rebbe officiated at the chuppah ceremony in the courtyard of the Rebbe’s synagogue at 770 Eastern Parkway in Crown Heights.

Back in France, Raskin and his older brother, Michel, had worked to support their family, renting machines with which they knitted sweaters. After his marriage, Raskin worked in a factory before deciding he wanted to go into business on his own. He didn’t have the money for knitting machinery, so he looked around for another idea.

When he started “I didn’t know anything about fish. It went very hard.”

“Then is araingefalen a meshugas [a wild idea popped up] that I want to have a fish market,” he recalled.

There were many Jews in the fish business—Crown Heights alone had three besides for him—and Raskin credited fellow Jewish fish-store owners for allowing him to hang around their stores and learn the business.

Raskin recalled how when he went to the Rebbe to ask for a blessing, the Rebbe laughed and asked him Vos veistu fun fish?—“What do you know about fish?” before giving him a blessing for success.

“I didn’t know anything about fish,” he later acknowledged. “It went very hard.”

The 1960s were a time of sweeping change in Crown Heights, as many of its Jewish residents began to flee due to rising crime and plunging property values. By the end of the decade, Crown Heights, which had been 70 percent Jewish in 1960, was majority African-American/Caribbean American. Even as Jews continued to close up shop, sell their homes and leave, the Rebbe insisted that his community stay, saying that those who did would not only survive but thrive.

Raskin’s Fish has operated from its location on Kingston Avenue, the main thoroughfare in the Jewish section of Crown Heights, throughout the ebb and flow of neighborhood tides. From just a simple storefront, it has grown to become a major kosher fish wholesaler with business around the world.

“Thank G‑d, we have a big business,” Raskin reflected, “but it grew from the ground up.”

In doing what he did with diligence, perseverance and, above all, faith, Raskin became a Brooklyn legend. Images of his store started showing up on murals in the Brooklyn Children’s Museum, his face appeared the cover of brochures, and his store became a mandatory stop on any political campaign or cultural discovery trail.

“From this business, thank G‑d, we married off our children; we made a beautiful open home with guests; we have a big sukkah where we make a big kiddush for hundreds of people,” he reflected in 2013 in between fulfilling orders. “Most importantly, all the grandchildren, thank G‑d, go in the Torah’s ways.”