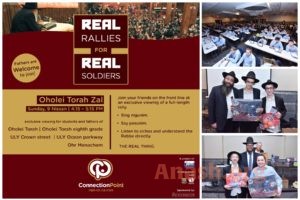 Rabbi Shimmy Weinbaum, program director of Tzivos Hashem, recalls his childhood days in England, when he would wake up at 2:00am to listen to a live hookup of the Rebbe’s farbrengens, for hours on end. “We couldn’t see the Rebbe and we didn’t always understand what we were hearing but it cultivated a real incredible hiskashrus in us.”

But today, most children aren’t getting that experience and do not have the ability to watch a full unfiltered farbrengen or rally of the Rebbe. “We see Rebbe videos but don’t always understand the toichen we’re getting,” says Benny Slapochnik, an Oholei Torah student.

That’s what Connection Point is aiming to change. The project, directed by Jewish Educational Media in partnership with Tzivos Hashem and local schools, gives children the opportunity to participate in a rally, and hear sichos directly from the source. “Why can’t they grow up watching full farbrengens of the Rebbe?” Weinbaum asks. “Wouldn’t that be a dream come true?”

The program, currently running in thirty Lubavitcher elementary schools, spends four weeks showing the children portions of rallies with a curriculum designed to “help every child understand the Rebbe directly.” The last session of the program invites students who excel in the first stages to watch the entire rally. With the use of worksheets, discussions, raffles and motivations, “the children walk away with key points and leave understanding a full sicha of the Rebbe,” says JEM Director Rabbi Elkana Shmotkin.

And they’ve been seeing success. Bais Rivka student Liel Sagy didn’t think she’d be able to keep up and fully understand but now says she’s enjoying the program and growing from it. Shmotkin says that “some children who have difficulties in other programs are successful here. That’s what we’re looking for.”

The curriculum also encourages the students to take practical lessons from what they’ve learned and apply it to their lives, which Bais Rivka’s assistant principal Mrs. Esther Wilhelm, lauds as “a major accomplishment!”

This Sunday, Connection Point is showing it’s fourth rally in schools around the U.S. In Crown Heights, Lubavitcher boys elementary schools are once again uniting to participate in the program together, in the Oholei Torah Zal from 4:15-5:15 p.m. Rabbi Levi Plotkin, director of Connection Point, says over 300 students from Crown Heights boys schools came together for the first rally, after school hours. “We’ve also been seeing tremendous success in girls’ schools—actually more than in the boys’,” he says.

For the first time, this week’s event in Crown Heights is also open for fathers to attend with their children.

The Rebbe is the first nasi, probably since Mordechai HaTzadik, who spent so much time directly with children, directly communicating and empowering them,” Shmotkin says. This program is giving the next generation the same opportunity their parents had and organizers hope it will be adopted in more schools. “If we could bring that into a reality, Moshaich [will be] here,” says Wilhelm.