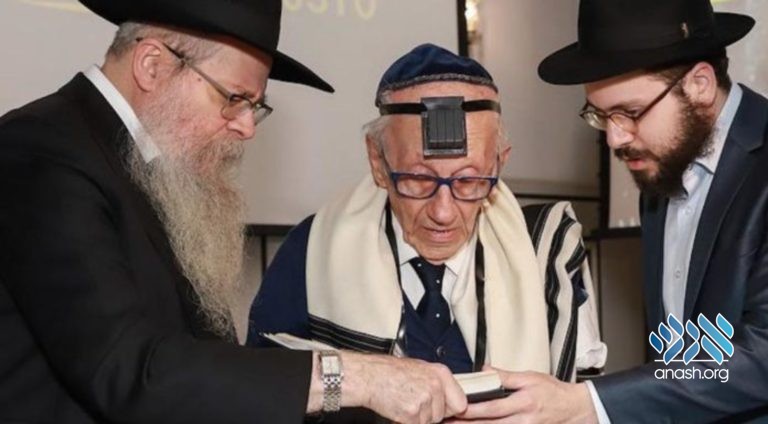 In a declining generation of Holocaust survivors, Andor Stern, the only survivor to have been born in Brazil, found a unique way to stand up to Nazism. With the help of shliach Rabbi Toive Weitman, he put on tefillin for the first time on Monday, celebrating his bar mitzvah– albeit 78 years late. The ceremony took place on the 81st anniversary of Kristallnacht at Kehillat Israel, Sao Paulo’s oldest shul.

“This is our answer to Hitler,” said Rabbi Weitman, who led the emotional ceremony. “Hitler’s goal was not only a physical slaughter of the Jewish people, but also a spiritual extermination. He failed. Mr. Stern continues, connected to his essence, celebrating life with his family.”

How did a Brazilian-born lad find himself in the crosshairs of the Nazis? When Andor was 3 years old, his family moved to India for his father’s work. In 1936, they came to Hungary, where his grandparents lived. When Brazil entered World War II, Andor was considered an enemy of the state and sent to a labor camp, from which he escaped.

In April 1944, the Sterns were sent to Auschwitz, where he remained for 13 months. Unfortunately, Andor’s mother and grandparents were killed in the gas chambers. When the camp was liberated on May 1, 1945, he was 17 and weighed 28 pounds.

In 1948, Andor returned to Brazil where he got married and raised five daughters. Today, he no longer fears the Nazis who terrorized him in the concentration camp all those years ago.

“A psychiatrist once told me that everyone who goes through what I did in war will never be whole again, will never leave the concentration camp,” Andor said. “I left it behind. Despite everything, I am very grateful to life for everything.”