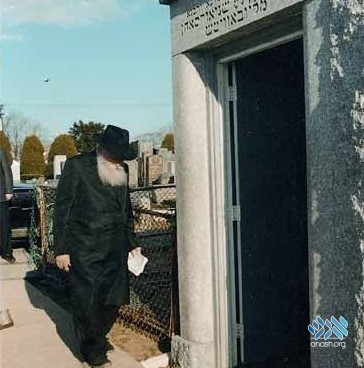 In a diary from 5726, a bochur notes the Rebbe’s intense dedication to his chassidim, including 6-hour farbrengens, yechidus all day, and 8 hours in the sun at the ohel.

Yesterday, the Rebbe went to the Ohel and stood on his feet for eight hours in the blazing sun. The Rebbe doesn’t eat before going to the Ohel. When he came back, he was pale.

It is a painful realization to think that as we sit in an air-conditioned room, the Rebbe stands in the sun, for us.

It is incomprehensible how the Rebbe does this. This past Thursday night, he farbrenged for thousands of people in honor of Yud-Beis Tammuz for six hours, until 3 am. Before 4 am he went home and then immediately returned, to accept visitors in yechidus. The yechidusin continued throughout the day, until 8pm, meaning ten minutes before Shabbos came in. He then went home for a few minutes, and returned for mincha.

He went home very late Friday night, and farbrenged Shabbos afternoon for another four and a half hours. And now, on Sunday, he has spent eight hours at the Ohel, in the summer heat.