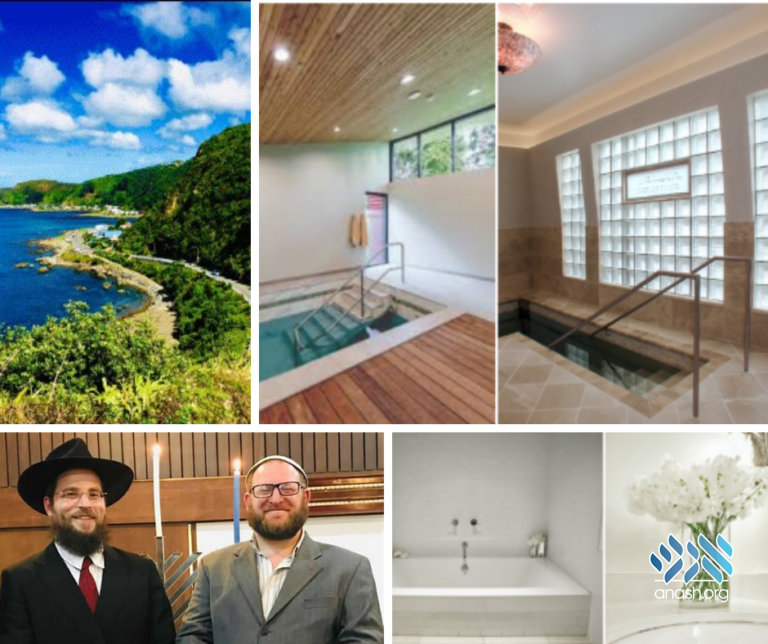 Tucked in the far southeastern corner of the globe, the Jewish community of Wellington, New Zealand, is in the process of rebuilding its aging community mikvah. For many, the endeavor is especially meaningful in the light of the special significance that the Rebbe attached to its construction as far back as 1944.

Wellington’s Jewish community had been established more than a century earlier, when Jews from the British Empire began trickling into the colony. The first Shabbat services were held in 1843. Two years later, when a Jewish baby passed away, the first Jewish cemetery was consecrated. Yet even as the community continued to attract new immigrants and many Jews became prominent in business and politics, the isolation and small size of the community proved challenging. Over the decades, some Jews intermarried and assimilated into the wider society. Despite everything, the Jewish community continued its struggle to not only survive, but thrive.

And so, in 1944, as World War II raged through the Pacific—and with Japanese ships and submarines on the attack in New Zealand waters—the Wellington Jewish community found itself hard at work trying to build a mikvah, a crucial Jewish communal institution necessary for sustaining Jewish family life.

World War II had not bypassed the Rebbe, either. His younger brother was killed in Ukraine during the Holocaust, and the Rebbe and his wife, Rebbetzin Chaya Mushka, had just escaped Nazi-occupied France in 1941. Arriving that year in New York, the Rebbe immediately threw himself into the work of his father-in-law, the sixth Rebbe who had arrived in America in 1940. In New York, the Rebbe was appointed executive director of Merkos L’Inyonei Chinuch, the educational arm of the Chabad-Lubavitch movement, and in this capacity corresponded with Jewish communities around the world, including, in 1944, a Jewish resident of Wellington, to whom he was also sending Jewish educational materials.

“We were gratified by your informing us that a committee has been organized for the purpose of building a mikvah in your city,” he wrote. “Certainly, you know that this is a matter of life and death, which must be sped along as quickly as possible, not to be delayed at all. There is no doubt that if they devote themselves to the task with proper zeal, they will bring the matter to fruition.”

Wellington was in no way unique. The published volumes of the Rebbe’s prodigious correspondence reveal a keen interest in and encouragement—often financial— for building, renovating and beautifying mikvahs all over the world—from Alaska to Australia, and Morocco to Moscow, whether affiliated with Chabad or not.

Around that time, Wellington was temporarily home to a Jewish businessman who had grown up within the Gur Chassidic community in Poland and whose business dealings took him to the city. His daughter lived in Brooklyn, N.Y., and the businessman came to the United States to visit her in 1949. In New York, he shared an elevator with the future Rebbe, who was then known as Ramash (an acronym for Rabbi Menachem Schneerson).

“Where are you from?” queried the Rebbe, whom the man did not recognize.

“My business takes me to New Zealand, where I now live,” the man replied.

“What’s doing with the mikvah there?” asked the rabbi.

“Listen, I am in Wellington to make money, not to get involved in mikvah matters,” replied the stranger.

“If Divine Providence takes a person to a community,” the Rebbe chided him gently, “he must make a difference there.”

After leaving the elevator, the man learned from his daughter that he was speaking to the Lubavitcher Rebbe’s son-in-law, who would assume leadership of the Chabad movement following the passing of Rabbi Yosef Yitzchak in 1950. Meanwhile, Wellington’s Jewish community managed to raise the necessary funds and complete their mikvah.

It was 1989. By this time, the Gur businessman has long ago left New Zealand, grown a beard and began wearing the garb of the Gur Chassidim. Finding himself once again in New York, he decided to receive a dollar from the Rebbe, who famously distributed bills for charity every Sunday. When the man’s turn came, the Rebbe looked him in the eye and asked, “So is there a mikvah in New Zealand?”

The man retold the chain of events to Rabbi Pinchas Menachem Alter, the Rebbe of Gur from 1992 until his passing in 1996.

“What impressed you about this story?” asked the Rebbe of Gur.

“The Rebbe’s phenomenal memory. Forty years had passed and I grew a beard, but the Rebbe recognized me and remembered our encounter,” replied the businessman.

“No,” replied the Rebbe of Gur. “For someone who lives a life of purity, it should come as no surprise that his mental faculty is so well-attuned. He did not only remember your external characteristics, which changed over time, but the essential makeup of your soul. The amazing thing is that for 40 years, the Lubavitcher Rebbe has been worrying about a mikvah in far-off New Zealand.”

The Rebbe of Gur would retell this encounter on numerous occasions.

A letter from the Rebbe’s office from 1974 encourages Chabad activists in Australia to assist the Jews of Auckland, by then the largest community in New Zealand, to repair their mikvah and urges them to arrange for one to be built in Christchurch as soon as possible.

‘I Cried When I Saw the Mikvah’

Over the years, the Jewish community of Wellington faithfully maintained their mikvah and built a new one when they moved into their current community center/synagogue complex in the 1970s.

But time took its toll, and according to a community fundraising page, “The mikvah is a barely functional and unsafe facility located inside a parking garage off of a dark alley. We are unable to keep the water heated, the stairs are crumbling, and there is no cleaning filtration system set in place.”

“I cried when I saw the mikvah on our first day in Wellington,” says Rachel Tal, a doula and Lamaze childbirth educator, whose husband, Rabbi Ariel Tal, is the rabbi of the community. “Our goal of strengthening Jewish life in Wellington cannot move forward without the most crucial part of Judaism, family purity.”

Stressing the importance of having a functioning and pleasant mikvah, she notes that some fly from as far as 300 kilometers away to use it.

The Tals are spearheading a campaign to build a fresh and welcoming facility. Noting Chabad’s presence in New Zealand, they are going the extra mile to ensure that the mikvah is built according to the exacting standards of Chabad tradition, which prefers that a rainwater chamber be built under the pool used for immersion.

When she learned that her project was a continuation of one the Rebbe had been involved in for so many years, Tals says she had chills running down her spine, and that it inspired her to redouble her fundraising and planning efforts.

Rabbi Mendy Goldstein, director of Chabad of New Zealand, has been active in helping secure the needed funds. “A functioning mikvah is the bedrock of a Jewish community; it is even more important than a Torah scroll. Thank G‑d, donors have been responded from across New Zealand, Australia and beyond.”

At the same time, the rabbi shared with Chabad.org that he is also in the process of finalizing plans for another mikvah, which will be the first-ever built in New Zealand’s South Island—a far-reaching ripple effect of the letter written by the Rebbe more than 75 years ago.

Click here to contribute to the Wellington Mikvah Campaign.