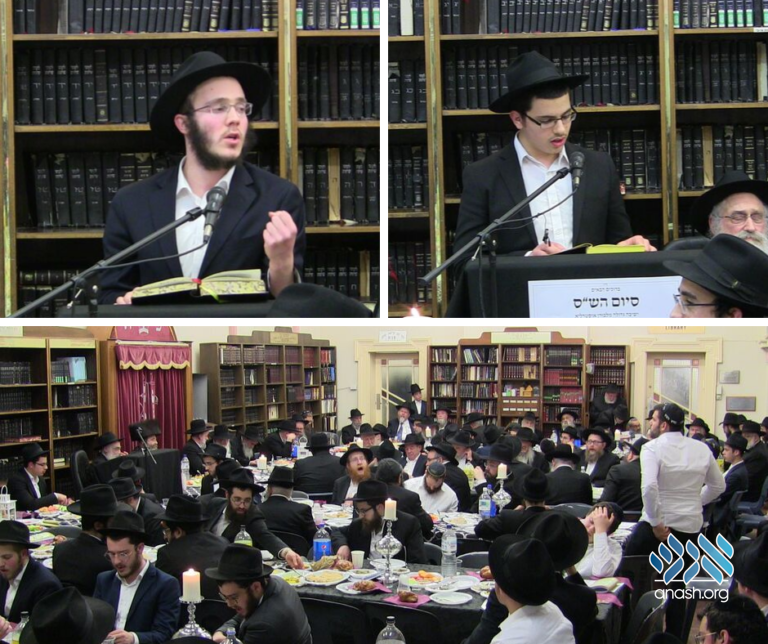 On the 15th of Elul, the day on which the Yeshivah Tomchei T’mimim was established in Lubavitch one hundred and twenty two years ago, a special Melave Malka took place in the Yeshivah Gedolah of Melbourne.

The occasion was unique. Two of the Yeshivah’s Talmidim, Shneur Schapiro and Mendel Lider, had each concluded their study of the entire Talmud Bavli. The Yeshivah felt that despite their actual learning having taken place in private, the celebration of their achievement was something in which the whole community should share. The honor and recognition which we give to Torah and its students, directly impacts upon our own connection with learning, and encourages us to continually improve and enhance our study of the Torah.

An awareness of the fact that two boys have, over a period of years, spent countless hours diligently studying the whole Talmud is surely an inspiration for all of us. The additional fact that all of this was done in their own time, not at the expense of the normal seder observed by all other Talmidim, makes their achievement truly remarkable.

At the Siyum (public celebration of the conclusion), which was attended by many Rabbonim, Baalei Batim and Bochrim, a large crowd heard Shneur Schapiro conclude the Shas. After reciting kaddish D’Rabonon he delivered a Pilpul (Scholarly discussion) concerning the Mitzvos of Shiluach Hakan (Sending away the mother bird) and Kibbud Av V’em (Honoring Parents).

In accordance with the custom to immediately commence the next cycle of learning, Mendel Lider spoke at length about the first Mishnah in Shas (Maseches Brochos), and the principles of Takonos D’Rabonon (Rabbinic decrees) which can be derived from it.

Rabbi Binyomin Wurtzburger, the Rosh Hakollel of Kollel Beth Hatalmud, expressed his appreciation of the increased emphasis on Torah learning which is generated by such an event. He also wished the Yeshivah Gedolah much success in their continued effort to promote and spread the study and observance of Torah in the wider community.

The Rov of Kehilas Adass Yisroel, HaRav Shloime Kohn, spoke of his envy of that which these two Talmidim had accomplished. He emphasized, however, that the main achievement of one who completes a given amount of Torah study is that through this he is now elevated to a higher level of knowledge and understanding and is therefore now obligated to learn and attain much more.

Speaking next, the Rosh Yeshivah of Yeshivah Gedolah, Rabbi Binyomin Cohen, pointed out that despite the fact that previous generations had not placed such emphasis on Talmidim finishing Shas, the phenomenal effort and focus invested in this should serve as an inspiration for all of us to utilize our spare time in the learning of Torah. Similarly, the completion of a medium -sized Maseches of Gemorah is something which is well within the capabilities of most Talmidim, who should be motivated to do this when they see how much these two Talmidim have managed to achieve.

In addition to the speeches, Talmidim of the Yeshivah Gedolah sang during the Melave Malka uplifting Chabad Niggunim from the Tefilos of Rosh Hashono and Yom Hakippurim.

All present agreed that the Siyum had been a great Kiddush HaShem, honouring Torah and those who learn it.

May the Yeshivah Gedolah have many more opportunities to arrange such celebrations and to promote the study of Yorah within and outside of it walls.