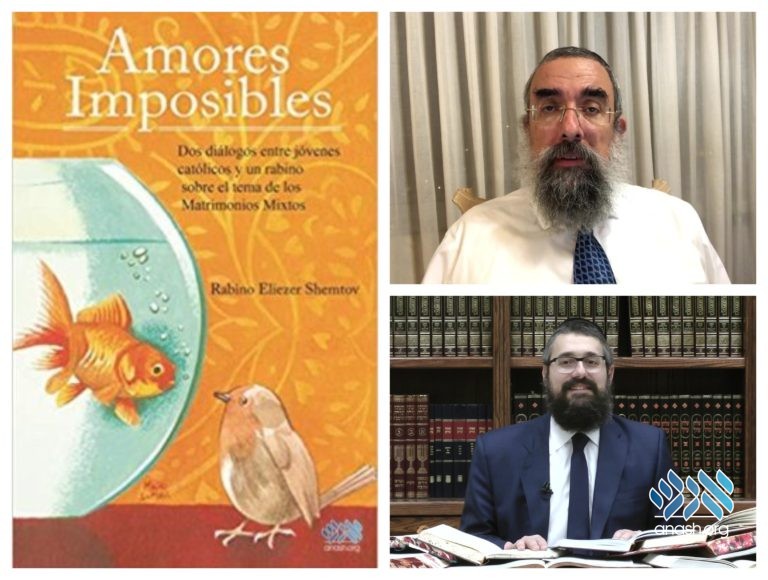 At a recent farbrengen with mekurovim, shliach Rabbi Eliezer Shemtov, head shliach to Uruguay, was inspired to make a bold move.

His book “Dear Rabbi, why can’t I marry her?” was a big hit when published over a decade ago. It’s a dialogue between a Catholic man and Rabbi Shemtov, where the young man wants to know why Jewish Law prohibits a Jewish girl from marrying him. To this young man Jews were now discriminating against others, after being the victims of discrimination all through the ages. The email conversation went on for some 2 years, branching out into other topics of interest to that young man, after which Rabbi Shemtov decided to compile them into a book.

As the book was first going to print then, a young Catholic woman contacted Rabbi Shemtov, and she wanted to know why she couldn’t marry a Jewish man. Thus, another series of emails were exchanged and added to the ultimate finished product.

At the time, the book caused quite an uproar in Uruguay, with Rabbi Shemtov and his book featured on local media. Some in Uruguay weren’t happy with his strong stance against intermarriage, but he was not to be deterred. Since then it went through several printings and has been a good tool in the fight against assimilation. Many shluchim have used this in their interactions with students who may, r”l, be in such relationships.

Recently Rabbi Shemtov was invited to speak about his book at an event at Chabad Flamingo, directed by Rabbi Mendel Kaplan. At the farbrengen the Shabbos before at Jabad of Punta del Este, Uruguay, the summer home of Chabad of Montevideo, Rabbi Shemtov mentioned that he’ll miss the last Shabbos of the summer season at Punta because he has a speaking engagement in Toronto where he’ll discuss the book. (Seasons in the Southern Hemisphere are reversed.) Two people at the farbrengen mentioned that they had read the book and loved it. They then floated the idea of doing a Spanish-language printing for shluchim so that they have copies ready for any person they come in contact with that may find themselves in that situation.

After reaching out to shluchim in Spanish speaking locales, they decided on a number of six thousand copies. That meant that six thousand college-age kids attend their programs and activities throughout a year. So after tweaking the book and re-setting it, the book went to print, coming off the press on Chof-Ches Sivan. The books are now being distributed to some 50 shluchim all over the world.

The book is available in four languages, the original Spanish, Portuguese, Hebrew, and English, with a fifth language, Russian, now in the works. Due to the book being re-typeset, it is now also available to be self-published from Amazon, as well as available for download on Kindle.

“The whole project was the outgrowth of a chassidisher farbrengen one Shabbos afternoon,” Rabbi Shemtov, said, “It’s a real story of mitzvah gorreres mitzvah, one mitzvah leading to another,” he added.