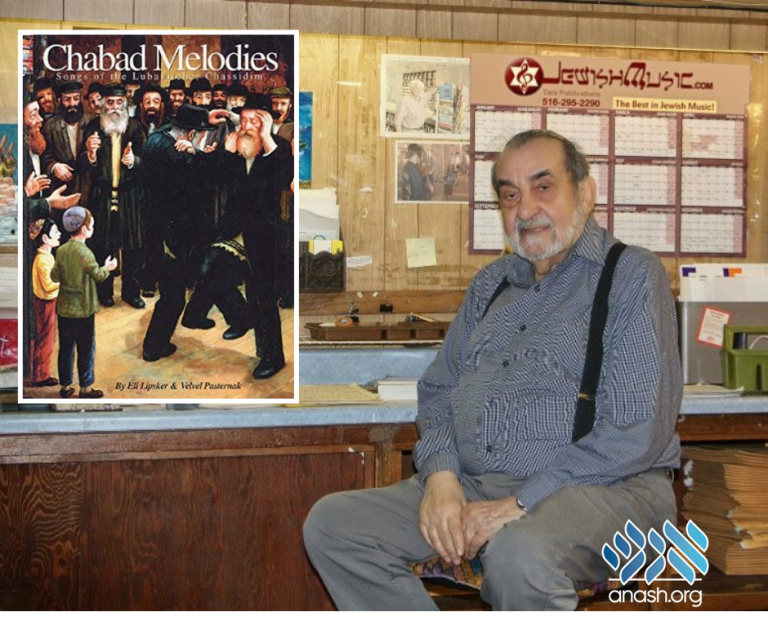 Mr. Velvel Pasternak A”H, who passed away last week, was a musicologist and producer with experience in arranging Chassidic music, and was hired to produce the Nichoach Records. The following is a comical account he wrote of the recording experience:

In 1962 I was approached by Benedict Stambler, a collector of Jewish music and a pioneer in the field of Hasidic recordings in the United States, to arrange and conduct a chorus of Lubavitch Hasidim for the first in a series of HaBaD recordings. Rabbi Shmuel Zalmanoff, editor of both volumes of Sefer HaNiggunim (an anthology of transcribed Lubavitch melodies) was appointed music consultant for this recording. He selected the songs and chose the Lubavitch Hasidim who were to sing in the chorus. Neither Stambler nor I had anything to do with the selection process. This was the “hand-picked chorus” that I would train and record…

The producers had been able to rent a studio on Eighth Avenue near 57th Street in Manhattan. A well-known sound engineer, David Hancock, was engaged.

Hancock had been one of the first sound engineers to transfer old seventy-eight r.p.m. recordings of the great cantors of the 20th century to magnetic tape for the Collectors Guild Record Company. In the process, much of the static and other extraneous noises were eliminated. Through this rather timeconsuming and tedious work, Hancock, who was not Jewish, became very familiar with—and developed great fondness for—Hebrew liturgical music. He looked forward to a live recording session of Hasidic music. His admonition to me was to get the “Lubos” (his endearing term for the Hasidim) into the studio no later than 7:30 p.m. At the then going rate of $45.00 per hour, the studio was quite expensive. I made sure that each of my singers and “ringers” knew the cost and importance of being on time.

I was at the studio by 6:30 p.m., discussed microphone set-up with our engineer, arranged placement of the chorus and instrumentalists, and set the order in which the selections would be recorded. At 7:20 p.m. Hancock asked, “Where are they?” Looking for my singers, I opened the window onto Eighth Avenue. The location of this studio happened to be a center of rock ‘n roll music, and the area was full of hippies, many of whom wore beards. To locate my bearded Hasidim was like looking for a needle in a haystack. At 7:25 I repeated the action and leaned far out of the window in order to get a better view of the street. This time I saw what looked like my Hasidim a block away. As they approached I noticed that there were far too many of them. I could only assume that my Hasidim had encountered another group of Hasidim in the subway and they were walking together up Eighth Avenue. I believed that at the entrance to the studio the group would split, and my Hasidim would enter the building while the others would continue to their destination.

Was I wrong! After the elevator disgorged its fifth load, there were more than sixty people in the studio. Only twenty-four of them belonged to my chorus and orchestra; the others were older Hasidim, women and children. Before I had a chance to vent my anger, two men began removing bottles of soda from a crate, and several women unpacked baked goods that included honey cake and sponge cake. Finally, for the pièce de résistance, a Hasid opened two brown paper bags and revealed four bottles of “zeks un ninetsiger” (192-proof vodka).

When he started passing filled shot glasses to all the singers I could no longer contain myself.

“What is going on here?”

“We’re going to have a farbrengen,” one of the Hasidim responded.

The Hasidim tried to calm me down. I was informed again that they were not professional singers. They could not simply approach a microphone and sing. Because they were doing the bidding of the Lubavitcher Rebbe, it was necessary for them to “warm up” both physically and spiritually. This could only be accomplished through a farbrengen.

“How long will this farbrengen last?” I asked rather timidly.

“This farbrengen will last as long as it lasts, not one minute longer,” came the reply.

A Hasid took out a photograph of the Rebbe and attached it to the wall with a thumb tack. The cake and the spirits were passed around, with soda for the women and children. Each singer toasted the Rebbe in absentia, and wished the others good luck in the duty they were about to perform. As the conductor, I was asked to join in the l’-hayyim (toast) and was given a small glass filled with vodka. Never having drunk alcohol of this strength, I imagined that the effect was similar to drinking Drano, the special liquid touted in commercials as unclogging everything on its way down.

The producers and sound engineers looked on from the control room in amazement. “I don’t believe this. We should get a reporter and a camera man from the entertainment newspaper Variety, because no one will believe that this scene happened unless it is documented.”

My singers and the other Hasidim took their time–fifty minutes in all. When the farbrengen ended, the soda, the vodka and the cake were whisked away. All those not performing were shunted to the sidelines of the studio and my sixteen singers and three “ringers” stepped up to the waiting microphones. One Hasid proclaimed, “Now we are ready to do the bidding of the Lubavitcher Rebbe.”

I finally felt that I had control of the situation. However, just before I gave the downbeat to the orchestra, Rabbi Zalmanoff approached me. “Before we begin I need a small favor from you.”

“Please what?” I asked in astonishment. “What do you mean, ‘don’t conduct?’”

For some reason, he must have thought I was having trouble with his English. “Don’t make with the hands,” he said. “Sit down, you’ll get paid anyway.”

“What do you mean, ‘sit down’?” I retorted. “I spent six months of my life rehearsing this group to get them ready for this recording, and now you tell me not to conduct? Please, tell me—what is the problem?”

“I see that you are a difficult man, so I will tell you the truth. You can conduct, but nobody will watch you.”

“Why will they not watch me?”

“Because if they watch you, it will get in the way of their kavvonoh (concentration),” he replied.

There it was, out in the open. I moved toward the chorus and gave the downbeat. The instrumentalists picked up the introduction while sixteen pairs of eyes closed on me. I could have been in another state as far as my singers were concerned. They sang with joy and fervor and the intensity of their singing permeated the entire studio. I realized that at the very least I had prepared them well enough to be able to sing their own melody and keep time with the instrumentalists.