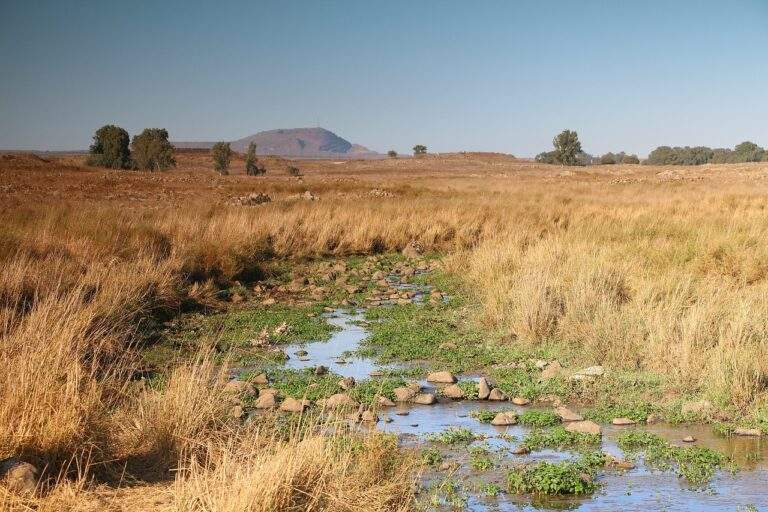 On Thursday, mid-Purim, US President Donald Trump tweeted: “After 52 years it is time for the United States to fully recognize Israel’s Sovereignty over the Golan Heights, which is of critical strategic and security importance to the State of Israel and Regional Stability!” And on the following Monday, he signed a proclamation to that effect.

This was the first time since the Israeli government captured the area in 1967 and extended full-fledged Israeli jurisdiction in late 1981, that the United States recognized that the Golan belongs permanently to Eretz Yisroel and should not be returned to Syrian control.

Over the years, the Golan and the important role it played in Israel’s security was mentioned a number of times by the Rebbe. The following are a selection:

During a sicha on Israeli issues on Shabbos parshas Eikev 5730 (1970), the Rebbe mentioned that some were proposing relinquishing the territories in the Golan Heights and leaving just a narrow corridor for Israeli security forces. The Rebbe drew a comparison to a similar arrangement between Poland and Germany decades earlier that ended in disaster, an apparent reference to the Danzig Corridor which cut through German territory and was the basis of conflict between the two countries culminating in the German invasion of Poland in September of 1939.

In a letter to Harav Shlomo Yosef Zevin from Cheshvan 5731 (1970), the Rebbe directly quoted from the previous day’s New York Times that “Israeli officials have asserted Israel’s desire to retain political control of Jerusalem, the Golan heights in Syria, Sharm el Sheik, at the southern tip of the Sinai Peninsula, and possibly small areas on the west bank of the Jordan River.” The Rebbe warned that this language, which appeared to originate with then-Minister of Foreign Affairs Abba Eban, served as a subtle attempt to set up the possibility for concessions, pointing in particular to the weak connotation of the word “desire.”

[In fact, the Israeli government’s official position through 2011, until the civil-war in Syria broke out, was that they were willing to return the Golan to Syria in exchange for a desirable peace agreement.]

In an incredibly detailed letter in English from Chanukah, 5741 (1980), the Rebbe made his position on the Golan and similar territories clear:

“I am completely and unequivocally opposed to the surrender of any of the liberated areas currently under negotiation, such as Yehuda and Shomron, the Golan Heights, etc. for the simple reason and only reason, that surrendering any part of them would contravene a clear psak din in Shulchan Aruch . . Now in regard to the liberated areas, all military experts, Jewish and non-Jewish, agree that in the present situation giving up any part of them would create serious security dangers. No one says that giving up any part of them would enhance the defensibility of the borders. But some military experts are prepared to take a chance in order not to antagonize Washington and/or to improve the “international image,” etc. To follow this line would not only go against the clear psak din, but would also ignore costly lessons of the past…”

Finally, the most famous sicha on the Golan came after Israel’s 1981 (Teves 5742) law which imposed full Israeli control of the territory.

In a statement made not long afterwards to the U.S. Ambassador to Israel Samuel Lewis, Prime Minister Menachem Begin said: “A week ago, as per the Cabinet’s proposal, the Knesset passed by a decisive two-thirds majority the Golan Heights law. Now you are once again priding yourselves on punishing Israel . . We take note of the fact that you have canceled the memorandum of understanding. The people of Israel have lived 3,700 years without a memorandum of understanding with America and will continue to live without it for another 3,700 years.”

In response, a certain Rosh Yeshiva in Israel, who was a consistent antagonist to the Rebbe and would often take the opposite positions, publicly argued in response that the law was harmful to “Am Yisroel” and especially to the Jews in America because it caused a confrontation with the Reagan Administration. As the JTA reported at the time, he “noted that Begin, in his recent attack on the Administration for suspending the U.S.-Israel strategic cooperation agreement, had said that Israel lived 3,700 years without such an accord and can live another 3,700 years without one. The rabbi observed in that connection that “Am Yisroel” lived 2,000 years without annexing the Golan and could live another 2,000 years the same way.”

The Rebbe responded forcefully and at length on 24 Teves, stating that this Rosh Yeshiva, by saying that we could live another 2,000 years without the Golan, had essentially said that we can remain in golus for another 2,000 years. The Rebbe added that beyond the terrible implication of his words from a standpoint of emunah, this statement undermining the Israeli position on the status of the Golan was now being exploited by Israel’s enemies, being translated into English and other languages and being quoted in this rabbi’s name at the United Nations to the detriment of Israel. The Rebbe concluded with quoting “Utzu eitzah…” and “Rabos Machshavos…”

Indeed times have changed and we’ve come a long way in 2019 since 1981, when instead of condemnations and threats of punishment, the U.S. is now recognizing the Golan’s strategic and security importance to Eretz Yisroel and acknowledging the Jewish people’s full sovereignty.