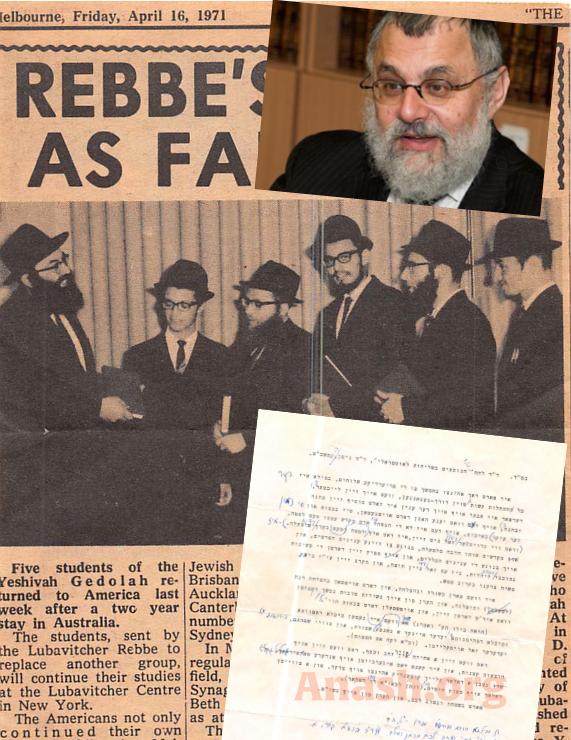 50 years ago, a select group of bochurim left New York for Australia on a special shlichus of the Rebbe. In an interview with Anash.org, Rabbi Shmuel Kaplan, a member of that group, shares his memories.

To commemorate fifty years since the second group of bochurim shluchim were sent by the Rebbe to Melbourne, Australia, Anash.org is pleased to present an interview with Rabbi Shmuel Kaplan, head shliach of the state of Maryland and a member of that particular group of shluchim.

As bochur shlichus goes, the Yeshiva Gedolah in Melbourne is considered one of the most prominent, mostly because the Rebbe gave this shlichus much attention in the form of sichos, letters and countless in-person directives. Below is a peek into the special connection the Rebbe had with the Melbourne shluchim.

How did you find out that you merited to be included in the second group of shluchim to Australia?

It started two years after the first group of shluchim were sent to Australia, before Pesach in 5729 (1969). They were set to return shortly and it wasn’t clear if the Rebbe was going to send additional shluchim. The Rebbe had said many extraordinary things about the shlichus and it was known that the shluchim in Melbourne were a “sensation” in the community. Rabbi Hodakov called me into his office with nine other bochurim and told us that we were on a provisional list for the shlichus to Melbourne and told us to get permission from our parents to go. Rabbi Hodakov cautioned against sharing this with anyone else because not all of us would end up being chosen by the Rebbe. As it turned out, only six of the ten on the list were selected for the shlichus.

Why was permission necessary? Was this standard practice for all bochurim who went on shlichus?

You have to understand, today the world has become a lot smaller but travelling to Australia back then was like traveling to another planet. We’d have to stay there for the two-year shlichus without coming home for Pesach, simchas or anything else.

I experienced this when my brother, Rabbi Leibel Kaplan a”h, went to Melbourne as part of the first kvutzah. And when I went, I missed my brother’s wedding. That was how the Rebbe wanted it, two full and uninterrupted years.

Did you experience any special gestures from the Rebbe in connection with the shlichus?

This shlichus was something the Rebbe held dear. For example, after the first kvutzah of bochurim came back from Australia, the Rebbe invited them to his Sedarim. At the second Seder, the Rebbe handed a piece of his personal afikoman to the shluchim who had returned. The Rashag turned to the Rebbe and asked, “Does it not say that the afikoman should be given to bnei bayis (family members)?” To which the Rebbe responded, “Zei zainen maine bnei bayis,” (“they are my family”)!

The Rebbe would often send letters to the shluchim. These were “kloli-proti”, meaning that each shliach would receive a personal copy of a letter written for the general group. There were times that the Rebbe would add some lines at the bottom of the personal letters. One such occasion was for my twentieth birthday.

Before we left, we went into the Rebbe for yechidus and at its conclusion, the Rebbe said that he expects to hear besuros toivos from us. Rabbi Hodakov told us afterwards that this was not merely a bracha, but also a request for a duch (report) every two weeks. Upon my return from Melbourne, I was informed by Rabbi Binyomin Klein that our duch would remain on the Rebbe’s desk for two weeks, until the following duch arrived.

How did the Melbourne community respond to the shlichus?

The effect on the community was tremendous, as the shluchim were the cornerstone of the founding of the yeshiva. But the mandate of the bochurim shluchim was very clear: we were to “sit and learn”. The yeshiva at the time was fledgling with only one mashpia, Reb Zalman Serybranski a”h. The Rebbe’s vision was that the shluchim would give the yeshiva the wings that it needed to soar. This was beyond the scope of what bochurim shluchim do today, as then we also served as maggidei shiurim and filled many other ruchnius roles.

It was clear from the Rebbe that the shlichus was not an outreach one, but rather, as the Rebbe said, “to conquer Australia through Torah learning.” As a part of this mandate, we would regularly give talks in the local shuls.

Many of today’s notable shluchim and members of anash are products of the work that the bochurim shluchim put in, such as world-renowned author and speaker Rabbi Laibl Wolf.

But aside from the effect we had on Melbourne, the shlichus had a transformative effect on us shluchim as well. It is what shaped my entire life on shlichus for years to come.

With the incredible honor came much responsibility. We wore ties every single day throughout our two years in Melbourne—which itself doesn’t mean much but was an indication of the importance of our position and a reminder to live up to it. Even just having this kind of responsibility was transformative for us bochurim.

Can you share with us a special incident that happened during your shlichus?

At one point, during Australia’s summer break in Kislev, 5729 (December, 1969), we paired up and traveled across the continent to inspire the various Jewish communities. I visited the cities of Adelaide and Brisbane. We all submitted reports to the Rebbe about the material and spiritual conditions of those communities.

After receiving the reports, the Rebbe asked why the city of Perth wasn’t included in the itinerary. Taking the cue, my chavrusa and I immediately traveled there.

Perth prides itself on being the most isolated city in the world—2,000 miles away from any major center of civilization—but surprisingly, it had quite a thriving Jewish community then. The primary factor for this was the G. Gorunski Carmel community Jewish day school that served as the central pillar of Jewish communal life. Mr. Gorunski, the philanthropist who endowed the school, fled from Russia during WWI and eventually settled in Perth where he made his fortune in business. While he was never blessed with his children, he devoted his entire wealth to ensuring Jewish education for the next generation by making the school tuition-free.

The driving force behind the school was its principal, Mr. Singer, who was widely regarded for his skill and leadership, and who greatly contributed to the strong reputation and success of the school. Mr. Singer shared with us that at one point, he planned on leaving the community for greener pastures. Nothing they offered could change his mind and the community was devastated. But then he received an unsolicited letter from the Rebbe personally asking him to stay on. Though he was not personally affiliated with Chabad, he had great admiration for the Rebbe and felt that he couldn’t refuse his request.

“When I received the letter,” he said, describing his feelings, “I realized that on Rosh Hashanah, when the Rebbe sheds tears for struggling Jewish communities around the world, there is one special tear that falls for Perth.”

That’s when we understood why Perth was on the Rebbe’s mind and why he sent us there: to support and encourage Mr. Singer, so the most isolated Jewish community in the world could continue being strong and vibrant.

Fifty years later, I am still touched afresh by the shlichus to Australia and see the effect it had on me to this very day.