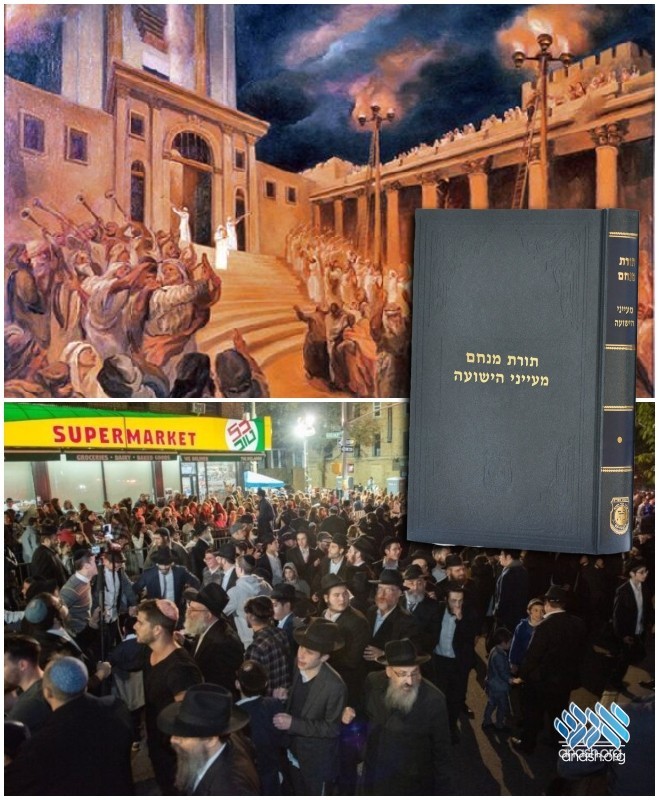 This Sukkos will mark 40 years since the Rebbe revitalized the celebration of Simchas Beis Hashoeva. This year, Lahak Hanochos is publishing the full collection of those sichos in a new Sefer: Toras Menachem – Mayanei Hayeshua,

The upcoming year of 5781 will mark forty years from 5741, a unique year in the annals of Chabad history, one which brought a marked growth and expansion of the Rebbe’s activities in New York and the world over.

It was a year of Hakhel, and the Rebbe spoke about it often. In Shalsheles Hayachas in the preface to Hayom Yom, there is the following entry: “[The Rebbe] raises awareness to the fact that it is a year of Hakhel, of gathering the entire nation, men, women, and children.” During the historic event of Birkas Hachama during Nissan of that year as well, the Rebbe connected the gathering to the Mitzvah of Hakhel.

It was during this year that the Rebbe established the international movement for Jewish children, Tzivos Hashem, even dedicating an entire Hakafah on Simchas Torah in their honor. It was also the year the Rebbe called for the writing of a special Torah for all Jewish children.

During that Tishrei, the Rebbe began a new custom. For the first time since assuming leadership of Chabad-Lubavitch, the Rebbe addressed the crowd in 770 on the topic of Simchas Beis Hashoevah, and encouraged Chassidim to revitalize the custom of dancing which had been prevalent during the times of the Beis Hamikdash.

After Gimmel Tammuz, upon the discovery of Reshimos, it came to light that the Rebbe held Simchas Beis Hashoevah farbrengens already in the year 5691 (1930), fifty years prior, in the court of the previous Rebbe. The Rebbe’s notes from these farbrengens were edited and published upon their discovery. During the early years after the Rebbe’s arrival here in America, he would also hold a Simchas Beis Hashoeva Farbrengen for Yeshivah students on one of the nights of Chol Hamoed, and during the first two decades of his Nesius, he would Farbreng on the second day of Sukkos as well, until the Sukkah could no longer contain the massive crowds that were streaming to the Farbrengens.

However, beginning in the years 5741, we merited an entirely new source of inspiration, a new source of “Mayanei Hayeshua.” Each night of Sukkos, after Maariv, the Rebbe would deliver a Sicha that would often span a full hour or more. These Sichos, which the Rebbe delivered while standing, would include teachings about the Ushpizin, both the regular Ushpizin and the Ushpizin of the Chabad Rebbes, as well as the connection between them. They also included discussions about the daily Chitas, and, beginning in 5745 (1984), the daily Shiur in Rambam, connecting them all to Simchas Beis Hashoevah.

This was also the year that Lahak Hanochos was officially established. Since then, Lahak has had the privilege to print and disseminate a staggering number of the Rebbe’s Seforim, totaling in one million and six hundred thousand volumes to date!

The first collection of Mayanei Hayeshua was released before Sukkos 5747; it included all the Sichos from the years 5741-5746. A year later, a new version was released, with the Sichos of 5747 incorporated. And every following year, a “Kuntres Hashlama” was published with the new Sichos of that Sukkos.

This Sefer is unique. Unlike most Seforim of Toras Menachem, where the Rebbe’s Sichos are presented in chronological order, this Sefer is split by topic. The Rebbe had a special appreciation for this Sefer, and it was always present in his Sukkah in front of 770. According to the testimony of the Rebbe’s secretaries, he used it on numerous occasions. Likewise, the Rebbe mentioned the collection in his Sichos, when citing topics which he had already discussed at length. His gratification for the publication of these Sichos was self-evident in those mentions – in addition to the clear encouragement and guidance which he gave the Manichim and Chozrim who worked on producing the content.

With the approach of the fortieth anniversary of that special time, when the Rebbe revitalized and elevated the celebration of Sukkos in general, and Simchas Beis Hashoevah in particular, the team at Lahak Hanochos has worked overtime to produce a new and expanded version of the Sefer, which would include all the Sichos from Tishrei 5741 through Tishrei 5752.

On the day of Chof Av, the 76th Yarzeit of the Rebbe’s father, Horav Levi Yitzchak, Lahak Hanochos announced a special sale, where one could purchase the new Sefer for just $12 (or 40 shekel in Eretz Yisrael) and collect it during the last week of 5780, with the approach of Tishrei 5781.

In Eretz Yisrael, the sefer will be available for pickup on Chai Elul in at Kehos in Kfar Chabad and Heichal Menachem of Yerushalayim. A pickup location in the north of Eretz Yisrael is being arranged as well. Shipping will not be available.

Communities outside of Eretz Yisrael and the USA who are interested in arranging a shipment of Seforim should reach out to the main desk of Lahak, at [email protected]