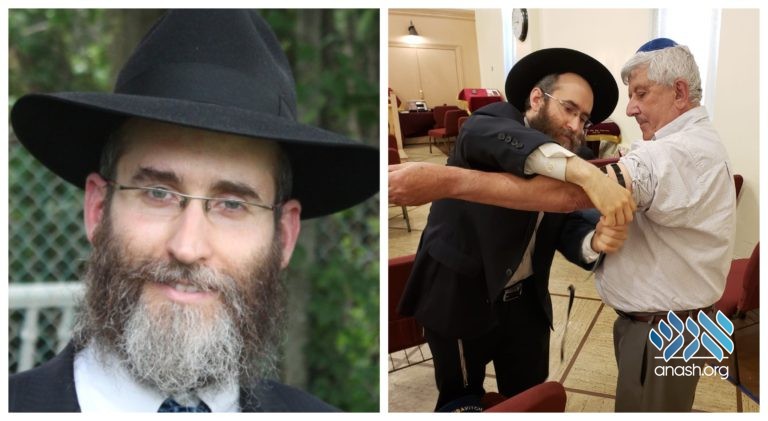 Birthdays are often a relatively private affair, a celebration involving family, friends or perhaps just one’s spouse. However, a 40th birthday, which is truly a milestone, calls for something special.

Rabbi Avrohom Bergstein of Anshei Lubavitch in Fair Lawn was inspired to do something different to mark his 40th birthday, but his idea was less about having a special celebration and more about meeting a specific goal. His plan was to recruit 40 Jewish men who did not as yet don tefillin regularly, and encourage them to commit to wearing them at least once a week. As Rabbi Bergstein explained, “Reaching important milestones in our lives prompts us to think of ways to show our appreciation for the blessings we’ve been given.” Put simply, he added, “I decided to challenge myself.”

His recruitment efforts involved a number of avenues. He posted a video on Facebook explaining the challenge, texted and emailed people on his contact list, and phoned a targeted group of individuals he felt could assist with his outreach. He explained what drove him. “Every opportunity that arises that can effectively strengthen Jewish observance, Jewish unity and Jewish identity should be utilized toward this end—and this seemed like the perfect way to do this!”

Jordan Rockowitz, an Anshei Lubavitch member, was one of the people who volunteered to help Rabbi Bergstein in his recruitment efforts. Rockowitz was able to reach several men who were willing to accept the tefillin challenge. He shared their reasoning for participating. “They felt it was an easy way to connect with God and Judaism quickly, without a taxing amount of time.”

One of those willing to give it a try was a man over 80 years old who had not put on tefillin since his bar mitzvah. Encouraged by Rabbi Bergstein, he said his reason for joining was because “it makes me feel more connected to our ancient heritage.” At the other end of both the age and religious spectrum was a young man in his early 20s who had regularly worn tefillin in the past, but had taken a different path in recent years. He also hearkened to Rabbi Bergstein’s request, saying, “For me, putting on tefillin puts me in the mindset of davening. It’s almost like the cup of coffee you need to get you ready.”

Rabbi Levi Neubort, who leads the efforts at Anshei Lubavitch, provided encouragement for and assistance with the project. For instance, after officiating at a woman’s funeral, he mentioned the challenge to the deceased woman’s son. The response was “Why not?” Rabbi Bergstein believes it may have been the first time that man ever wore tefillin.