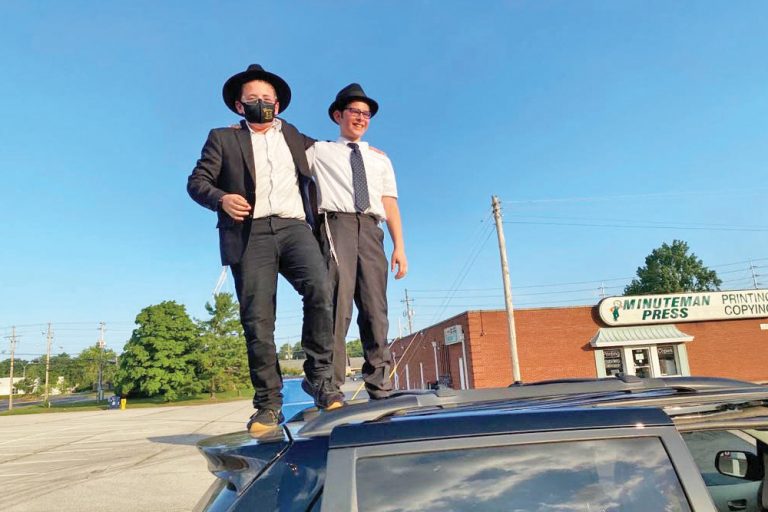 Shul of Bellaire Rabbi Yossi Zaklikofsky didn’t expect his summer vacation to include eating kosher Chinese food at a Memphis, Tenn., JCC, or dancing on top of a minivan in Louisville, Ky., but there was no shortage of memories after returning from a nine-day, 3,200-mile road trip.

Rabbi Zaklikofsky, along with his wife, Esty, and four of their six children, headed north earlier this month with two main goals: Get their son, Mendel, to summer camp in Michigan and continue to honor Rabbi Zaklikofsky’s father’s memory by saying Kaddish with a minyan twice a day.

The family stopped at nine synagogues in seven different states along the way, culminating with a surprise “Car Mitzvah” in Kentucky. And, Rabbi Zaklikofsky led an emotional service from the same pulpit his father, Rabbi Moshe Zaklikofsky, stood for three decades in Oak Park, Mich.

“The trip wasn’t really planned; it was kind of last minute, but I’m happy we did it,’ Rabbi Zaklikofsky told the JHV. “It really became like a minyan tour, because we were so focused on getting to the next place, but we really loved seeing beautiful cities, shuls and communities.”

Mendel originally was going to fly to camp, but after the Zaklikofsky’s three younger children’s Houston day camp closed because of COVID guidelines, the family decided to forgo another two weeks of staying at home and hopped into the minivan to go on an adventure.

The first stop was Memphis, where Rabbi Zaklikofsky said Kaddish at Baron Hirsch Congregation and discovered a more vibrant Jewish community than expected, including a kosher Chinese restaurant named the Holy Cow.

Next stop was Louisville, where the family surprised one of Mendel’s summer camp friends who was having a Bar Mitzvah service. Because of COVID, the ritual was turned into a Car Mitzvah, with the Bar Mitzvah boy giving his speech from atop a cherry picker.

“It was amazing. People got out and danced near their cars or on top of their cars,” Rabbi Zaklikofsky said. “We were so happy that we were able to make his day. It was a great experience, and it was the cherry on top of this trip.”

Once it got dark, the rabbi went to the Chabad of Louisville Shul and led the service and recited Kaddish.

The next stop was B’nai Torah in Indianapolis, where Rabbi Zaklikofsky had spent a summer mission visiting Jews in isolated communities.

Then came the most emotional stop on the tour – Mishkan Israel in Oak Park, Mich, where Rabbi Zaklikofsky grew up with his father, Rabbi Moshe Zaklikofsky, leading services.

“It was especially meaningful to be able to lead services to honor my father at his shul, where he was for 35 years,” Rabbi Zaklikofsky said. “To do so at the very pulpit he prayed, literally 5 or 6 feet from his office where he spent decades working.

“All Jews know to recite Kaddish for a loved one. The Fifth Commandment – to honor your parents – is so important. Reciting Kaddish is a way we continue to do that after they have departed for the next world, and something I am absolutely committed to doing.”

After leaving Michigan, the Zaklikofskys headed west, making stops at B’nai Reuven in Chicago, Chabad of Uptown in Minneapolis and Adath Israel in St. Paul, Minn. While in Minnesota, they spent time at the lake with Esty’s sister’s family.

The return south saw stops at Beth Israel Abraham in Kansas and Chabad of Overland Park, Kan. More than half of the synagogues the Zaklikofskys visited were for the first time.

“It was really beautiful to be able to experience the cities, communities and synagogues I had never been to before,” Rabbi Zaklikofsky said. “Some shuls were indoors with masks. Others had services outdoors.

“People were very welcoming, whether it was community members or the rabbi. To them, I was just a stranger or random traveler, but I was treated as good as they would treat anyone, which was very meaningful.”

Spending nearly 50 hours on the road did have its challenges, as well.

“As we were driving through Little Rock, Ark., an actual little rock hit our windshield and cracked it, which continued to spread throughout the next few days. Not a big deal. It was just funny how it happened in Little Rock.”

While the family came back with plenty of good memories, Rabbi Zaklikofsky compared the road trip to life itself, especially during these pandemic times.

“As a rabbi, I have heard from a lot of people over the last few months about their life being thrown off course, and some are having a difficult time,” he said.

“Life itself – especially what we are going through now – is like a road trip. You let go of certain essentials and comforts, but like life, when you are in your comfort zone, it anchors us or adds a sense of grounding in our life. I believe that Jewish rituals do that.

“On this road trip, even though we were away from home and away from our comforts, I maintained this commitment to recite Kaddish. It gave me a strong sense of grounding or anchor – from one city to the next – that a welcoming community was always there.”