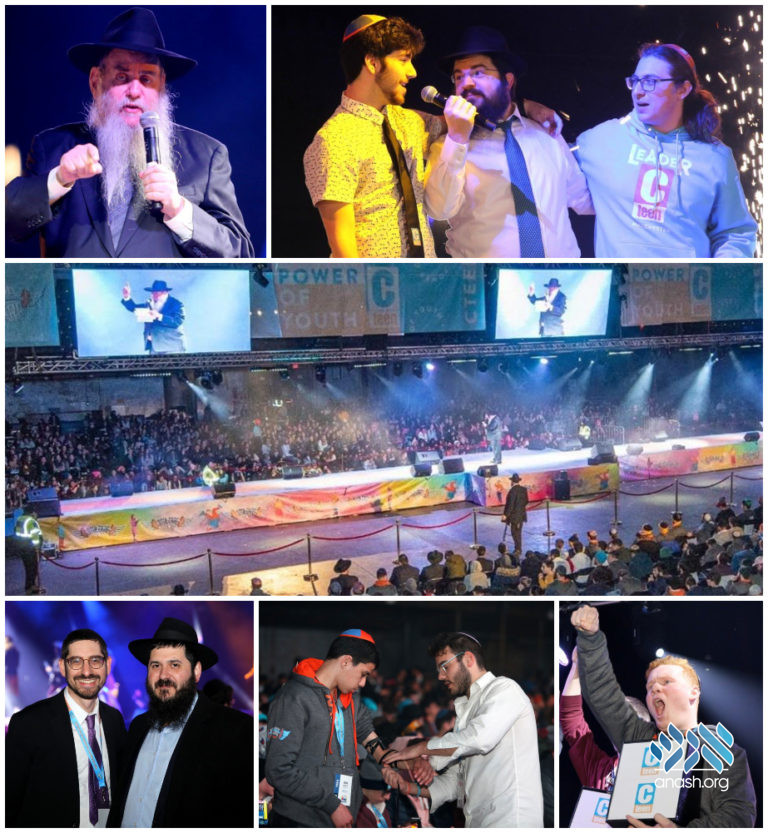 Thousands of teens and shluchim who came to NY for the annual CTeen Shabbaton concluded the weekend with a grand banquet focusing on ‘soul care’.

By Karen Schwartz for Chabad.org

CTeen gave Rachel Wilkes-Goffstein a new perspective on life, says the 20-year-old from Hollywood, Fla., who attended her seventh CTeen International Shabbaton this past weekend, coming as a chaperone for a second time, in addition to the five times she attended as a teen participant.

Wilkes-Goffstein told her story at the program’s closing event—of finding community, meeting her husband, and CTeen giving her strength and self-appreciation that helped her through tough times, including when she lost her parents—to some 2,700 teens and Chabad-Lubavitch emissaries gathered in New York City for the 12th CTeen International Shabbaton that took place from Feb. 27 to March 1.

“CTeen brought meaning into my life,” related the alum of the program, which has 620 chapters worldwide. “My Jewish experience was great; I knew a lot about the holidays and such beforehand, but CTeen really shaped that Jewish experience for me.”

She met her husband, Joey Goffstein, in 2014 when she attended the Shabbaton as a student with the Hallandale CTeen chapter, and he came in as a student from Teaneck, N.J. Today, they serve as co-directors of CTeen of Hallandale, Fla., and brought a group of 11 teens to experience the weekend.

“I’m most excited to have them walk the steps that helped me become religious because I didn’t grow up that way, and show them that I was in their shoes three, four years ago,” she said. “I want them to see the family that’s grown through CTeen for me and how I’ve been able to stay involved this long. I want them to have that, too. I want them to see how it really is a family—it’s not just a high school thing.”

The theme of this year’s conference was “Soul Care,” which focused on the idea that each person is a soul with a body, and that “there’s no better time than now to tone up and hit the spiritual gym.”

Participants from nearly 500 cities worldwide spent their time in New York reconnecting with friends and making new ones, attending workshops and taking in some of the famous city’s sights.

The groups stayed in the Crown Heights neighborhood of Brooklyn, N.Y., where they spent Shabbat with local hosts and at group programming. On Saturday night after Shabbat, they “took over” Times Square, where they enjoyed a Havdalah ceremony and a concert, with their pictures flashing on the giant screens overhead. Many also made a trip to the Ohel in Queens, N.Y.—the resting place of the Rebbe, and his father-in-law, the sixth Rebbe.

The weekend culminated with a banquet lunch and “Soul Care” event, as well as the CTeen Choice Awards, where participants find out who was voted “leader of the year,” at the Williamsburg Armory in Brooklyn.

‘Be Proud to Help Others Be Proud’

Daniella Futoran, 17, came from Long Island, N.Y., to attend her fourth CTeen banquet. Far from her parents’ childhood experiences of living in Communist-era Soviet Russia and her mother being forbidden from attending synagogue during the day for fear of getting kicked out of school, Futoran attended Chabad’s Hebrew school from the time she was 4 years old until her bat mitzvah.

CTeen and being at the banquet is a priority in part because of the impact that the group has had on her, she said, explaining that her Jewish experience is different from her peers’ at school, where saying she plans to fast on Yom Kippur or go to services all day is unusual. “I came to my first CTeen Shabbaton and was surrounded by 2,600 people who all did the same things as me, and they had so much pride in doing those things,” she recalled. “It didn’t make them feel weird or different; that was where they belonged, that was what they were proud of doing.”

The group has also helped Shai Fichtelberg learn to wear her Judaism with pride. A third-time attendee from Sonoma County, Calif., the 16-year-old says the Shabbat weekend is an opportunity to make connections that will last a lifetime and a place where she learned to stand up to adversity. “CTeen has helped me be proud in order to help others be proud,” she said.

Coming from a school where there are some 20 Jewish teens out of 2,000, she says being Jewish hasn’t always been easy. Other students sometimes tell jokes about the Holocaust, draw swastikas on her paper and throw pennies at her, she said, but through Chabad, she has learned how to deal with the situation in ways that make a difference.

Fichtelberg, who came with a few returning participants and a first-time attendee from Wyoming, says her advice is to make the most of the experience. “Don’t be afraid to join in and have a good time. Talk to the person next to you, dance with the crowd, because soon it’s your last year with CTeen.”

Ori Artzi, 19, an athlete from Omer, a city in Israel’s Negev Desert, addressed his peers at the closing event about living Judaism and the importance of action. “We don’t need to read about how our muscles work to sign up for the gym. We know it’s good for us, so we do it,” he explained. “And just like doing exercise at heart won’t satisfy the body, being Jewish at heart doesn’t satisfy the soul!”

He encouraged those gathered to “go for the gold” and take the opportunity to do a mitzvah. “Today, I’m still Jewish at heart,” he said. “But more importantly, I live Jewishly!”

As for immediate opportunities to get involved, the teens heard about CTeen U, a college course on the tenets of Judaism that Chabad Teen Network is running in partnership with Yeshiva University in New York, which can earn them two private college credits. The teens also took a pledge to become “personal soul trainers” and get others involved in mitzvot, good deeds. To start, they headed home to encourage their peers to exchange mishloach manot, gifts of food to friends and neighbors for Purim, which starts on the evening of March 9 and lasts through sundown on March 10.