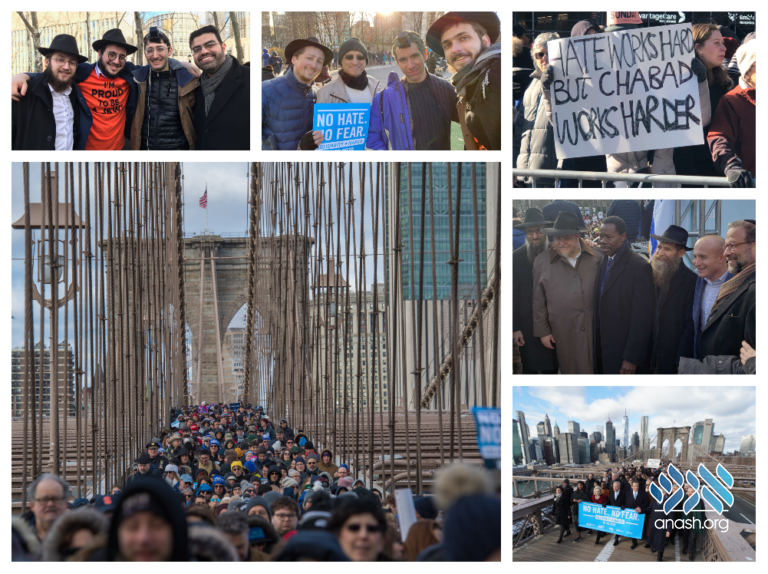 Thousands marched across the Brooklyn Bridge in a march to show solidarity with the victims of recent anti-Semitic attacks. Chabad Mitzvah Tanks showed up and helped hundreds put on tefillin.

Throngs of demonstrators joined by elected officials walked solemnly across the Brooklyn Bridge in a solidarity march Sunday against anti-Semitism and all acts of hate.

The “No Hate, No Fear” march was organized by various New York Jewish organization in the wake of recent anti-Semitic attacks, including a knife attack at a Chanukkah celebration north of New York City that left five people wounded and a fatal shootout at a kosher grocery in Jersey City, New Jersey.

The crowds of participants jammed the streets in lower Manhattan as they waited for their turns to get across the bridge.

Two ‘Mitzvah Tanks’ from Crown Heights brought bochurim who set up mivtzoim stands and walked among the marchers, offering the Jewish men a chance to put on tefillin. One of ‘tankistin‘ told Anash.org that they put on tefillin with hundreds of men.

Among the actual marchers, one could only see token frumme yidden, and even fewer identifiable Chassidim. Chaskel Bennet, noted Jewish community activist, delivered a passionate speech defending the Chassidic community, and condemned those who are attacking Yeshiva community as sowing the seeds of hate. Other activists were also seen, including Rabbis Chanina Sperlin and Eli Cohen of Crown Heights.

However for the most part, it seemed that the organizers did not seek to care to collaborate on the march with Chassidim, the actual victims of the attacks.

Additionally, one of the co-sponsors of the event was the notorious YAFFED, who spend their time spreading slander about frumme yidden in general, and yeshivos in particular. This led numerous frumme politicians to back out of attending. Noted askan Yosef Rapaport tweeted a picture of the sign with the YAFFED logo and wrote: “The arsonists are joining the fire brigade!?!”

Marchers carried signs saying “No hate in our state” and “Always here without fear.”