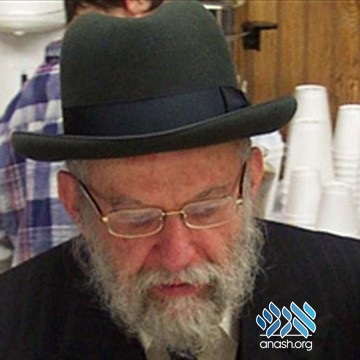 In honor of the 10th yahrtzeit of Rabbi Sholom Ber Gourarie, his son, Rabbi Michoel Gourarie of Sydney, Australia shares a collection of stories about his father.

Rabbi Gourarie was born in Tel Aviv in the year 5692/1932 to the famous Chossid Rabbi Moshe Gourarie, head of Aguch in Eretz Yisrael. In 5711/1950, he traveled to Crown Heights to study in 770 and be near the Rebbe.

After marrying his wife Winnie, zol gezunt zein, he went on shlichus to Cape Town, South Africa, later moving to Johannesburg where he lived until his passing on Tes Sivan, 5769/2009.

One day, as Rabbi Gourarie was exiting his car upon arriving home from work, he was attacked by a thief. Baruch Hashem, he managed to escape, making it safely into his house. He asked his son, Michoel, who was learning in 770 at the time, to write to the Rebbe about the incident. The Rebbe responded, “Were there sefarim and a pushka in the car?”

Interestingly enough, though Rabbi Gourarie was always careful to learn Chitas before eating breakfast, that day, he had to leave early and was unable to do so. He took the Chitas from his car in order to finish learning at work, and forgot to put it back before returning home.

From then on, Rabbi Gourarie was very careful to always have a Chitas in the car, and he made sure to share the importance of this practice with others as well.

As a bochur, Rabbi Gourarie came from Eretz Yisroel to learn in 770. During his time there, his uncle, Reb Zalman Gurary, took care of him. One Shabbos, Reb Sholom Ber had a terrible pain in his stomach. His uncle was concerned and didn’t know what to do, so he knocked on the Rebbe’s door and asked. The Rebbe told him to ask a rav.

Reb Zalman went to ask Reb Shmuel Levitin, who in turn told him to ask the Rebbe. Reb Zalman went back to the Rebbe, who said, “I told you to ask a rav!” Reb Zalman, mustered up a bit of chutzpah and replied, “If we keep on going back on forth, Shabbos will be over!” To which the Rebbe responded, “Nu…”

Reb Zalman understood from this response that there was no reason to go to the hospital on Shabbos. Right after Shabbos ended he took his nephew to the hospital to be checked out. It turned out not to be appendicitis, as he had feared, but a less severe stomach issue.

Later that week, the Rebbe stopped Reb Sholom Ber in the hallway of 770 and asked what the doctor had said. He replied that he had a stomach issue and the doctor had put him on a special diet. The Rebbe then told him to follow the doctor’s instructions.

Once, in yechidus, the Rebbe told Reb Sholom Ber that he looks pale and should go to camp. Though he wasn’t a camp person at all, he went with kabalas ol Camp Mesivta, which was run by Yeshiva Torah Vodaas. (There were no Lubavitch camps yet.)

Another time, the Rebbe stopped Reb Sholom Ber’s father in the hallway when Sholom Ber was delivering a pilpul in the Zal, and said to him, “He (Sholom Ber) kochs in learning!”