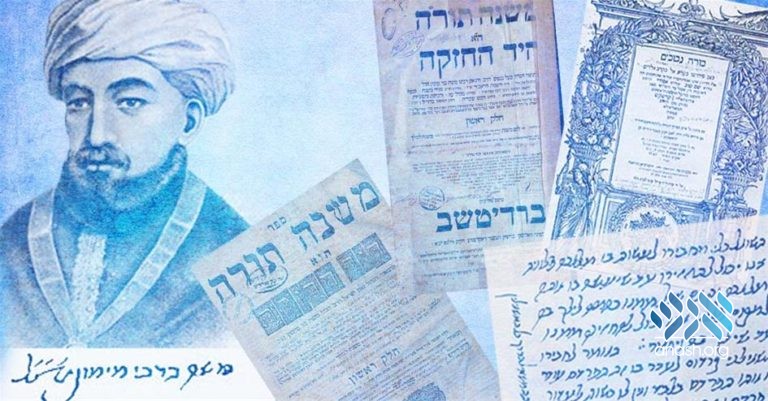 1. Rambam Is Studied Daily by Thousands of People Worldwide

Rabbi Moshe ben Maimon (1135-1204), known in the Jewish world by the acronym “Rambam” and to the world at large as “Maimonides,” is one of the most important figures in the history of Torah scholarship. His magnum opus is his Mishneh Torah, a systematic codification of Jewish law.

The Lubavitcher Rebbe called for an innovative addition to the daily study schedule. He suggested that every Jewish person study a portion of the Mishneh Torah daily—a suggestion that has since been actualized by thousands of people across the globe.

2. It Is the Only Book to Cover All of Jewish Law

In the entirety of Torah literature that follows the Bible, there is not a single work that encompasses the totality of Jewish law. The sole exception is the Rambam in his Mishneh Torah.

The Rambam was the first to index the entire body of Oral Law and compile it in a logical and systematic fashion. He even included laws that will only be relevant in the Messianic era, such as the laws of tithing, the Jubilee Year, and the Temple service. To this very day, the Mishneh Torah remains the only work of this scope.

By following the daily Rambam cycle, every individual has the ability to study the entire body of Jewish law, a goal otherwise not within reach for most people.

3. It Contributes to Jewish Unity

The Rebbe explained that one of the principal elements in the study of the Mishneh Torahis the unification of Jewry. When everyone studies the same material on the same day, their learning is united across continents. Additionally, when different people study the same topic, they will come to discuss and debate it, ultimately bringing them closer to each other.

4. There Are Three Alternative Schedules

The Rebbe suggested three possible schedules, to meet the specific circumstances and capabilities of every Jewish man, woman, and child:

5. It Has Fourteen Parts

The Mishneh Torah is divided into fourteen books, each one subdivided into numerous sections, chapters, and laws.

6. It Is Presently Being Started for the 39th Time

The Rebbe initiated the daily study of Rambam in the spring of 1984. The Rambam has since been studied by thousands of men, women, and children from across the spectrum of Jewish observance. The participants are presently concluding the 38th cycle and immediately continuing with the 39th.

Every year, special siyum (completion) celebrations take place, recognizing and celebrating the accomplishments of those who have studied over the past year. A major Siyum HaRambam event takes place annually in Brooklyn, N.Y., along with many other events at Chabad centers around the world.

The Rebbe would participate in the yearly completion by giving in-depth expositions on the final chapter of the Rambam’s work, linking it with the first chapter.

8. Celebrations in Tiberias, Fez, and Cairo

Among the numerous locations where celebrations are held, special mention should be made of those places associated with the Rambam himself. In Israel, major public events are held annually at the resting place of the Rambam in Tiberias. Celebrations have also been held in Fez, Morocco, where the Rambam lived after escaping with his family from Spain, as well as in Cairo, Egypt, where he wrote the Mishneh Torah.

9. It Has Three Names

The Rambam named his work Mishneh Torah (lit., “second to the Torah”). In his introduction to the book, he explains the reason for this name: “A person will be able to study the Written Law and then study this textand comprehend the entire Oral Law from it, without needing to study any other text between them.”

The work is also referred to as the Yad HaChazakah (lit., “The Strong Hand”). It is so called because the Hebrew word for hand – יד – is numerically equivalent to 14, the number of books in the Mishneh Torah.

The most common method of referring to the book is simply as “the Rambam,” after its author. The word Rambam itself is an acronym (in Hebrew) for R. Moshe ben Maimon, Moses son of Maimon.

10. It Is the Rambam’s Only Hebrew Work

The Rambam authored many other works, most notably his Commentary on the Mishnah, Sefer Hamitzvot, and Moreh Nevuchim (Guide for the Perplexed). However, these other works were originally written in Judeo-Arabic (the language of the masses in the Iberian Peninsula and North Africa, where the Rambam lived), and were subsequently translated by others into Hebrew and other languages. The Mishneh Torah is the Rambam’s only work which he himself penned in Hebrew.

11. Hundreds of Commentaries Have Been Written on It

Hundreds of commentators have elucidated the text of Mishneh Torah, beginning with the Rambam’s contemporaries (some of whom wrote critical commentaries to disprove some of his rulings). Indeed, commentaries on Mishneh Torah continue to be written to this day, uncovering the endless depths of his words.

12. It Incorporates Philosophy, Health, and Astronomy

The Rambam’s work covers a wide range of topics, beyond what obviously relates to Jewish law. The first section of Mishneh Torah presents the basics of Jewish thought and belief, such as G‑d’s unity and freedom of choice. There is a chapter with guidance on maintaining a healthy lifestyle, teaching learners that all our actions should be permeated with holiness and G‑dliness. The Rambam also explains at length the astronomical calculations used to determine the appearance of the new moon, which serves as the basis of the Jewish calendar.

13. It Concludes with the Laws of Moshiach

Among the distinctions of the Mishneh Torah is that it concludes with two chapters describing the personality of Moshiach, his coming, and what life will be like after his arrival.

The Rambam concludes the final chapter with these words:

In that era, there will be neither famine nor war, envy nor competition, for good will flow in abundance and all the delights will be freely available as dust. The occupation of the entire world will be solely to know G‑d. Therefore, the Jews will be great sages and know the hidden matters, grasping the knowledge of their Creator according to the full extent of human potential, as Isaiah 11:9 states: “The world will be filled with the knowledge of G‑d as the waters cover the ocean bed.”

Unite with the thousands of people who have mastered “the entire Torah” by studying the Mishneh Torah. Now is the perfect time to get started.