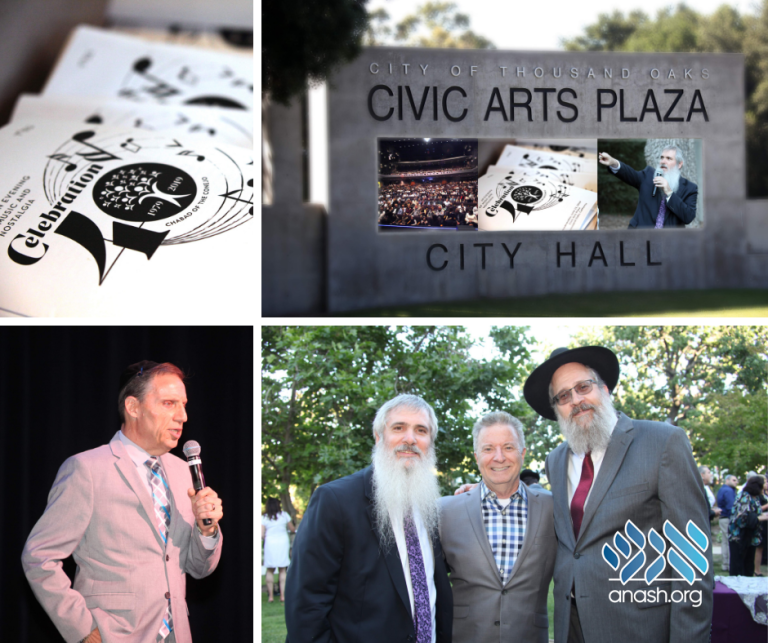 More than 1,300 enthusiastic friends and supporters of Chabad of the Conejo attended its 40th Anniversary Gala-Concert on Wednesday.

Billed as an “Evening of Music and Nostalgia,” Celebration 40  featured an elegant cocktail reception, a rousing musical performance, and a video highlighting Chabad of the Conejo’s evolution from a single storefront in 1979 into the network of nine regional centers it is today.

In his evening’s address, shliach Rabbi Moshe Bryski, offered a brief verbal tour of some of the organization’s programs and milestones over four decades, including its wide array of outreach and social service programs; schools, youth programs and summer camp; Friendship Circle for children with special needs; Sunshine Club for seniors; premiere adult education institute; and construction of a multipurpose facility in Agoura Hills known as the Center for Jewish Life.

“Over the years, this organization has served as a breeding- and training-ground for many prominent Jewish leaders and educators,” he said. “Some of the most successful college-campus and community rabbis, army chaplains and directors of organizations ‘earned their outreach chops’ as camp counselors or rabbinic interns right here in the Conejo Valley.”

As a case in point, the concert audience got to hear from Ms. Talia Lewis, an alumnus of Chabad of the Conejo’s C-Teen and Hebrew High programs, who is currently very active in Chabad on Campus at Texas A & M University. In addition to inspiring her participation in Jewish study programs in New York, Florida and Israel, Lewis’s exposure to Chabad as a teenager led to her starting a C-Teen chapter in College Station, Texas, where one previously did not exist.

“True to the Rebbe’s vision and motif, Chabad of the Conejo has served as a global generator of kinetic energy, delivering spiritual light throughout the world via ambassadors who discovered their own ‘soul’s light-switches’ through the organization the folks in this room built together,” said Rabbi Bryski.

He then went on to assure the assembled that the first 40 years was Chabad just getting started. “As Jews, our past informs our future,” he said. “We build upon our past and are emboldened by our past, so as to face the challenges of our future with renewed focus, resolve and determination.”

Even as the messages of nostalgia and inspiration established the theme and purpose of the evening, the speeches occupied a relatively small portion of the concert program, the bulk of which consisted of a masterful performance by the three giant voices and dynamic personalities of the Kol Esperanza trio.

One thrilled audience member at the post-concert dessert reception summed up the evening as follows, “A powerful combination of Yiddishkeit… Jewish pride, unity and entertainment at its best… It was a real celebration!”