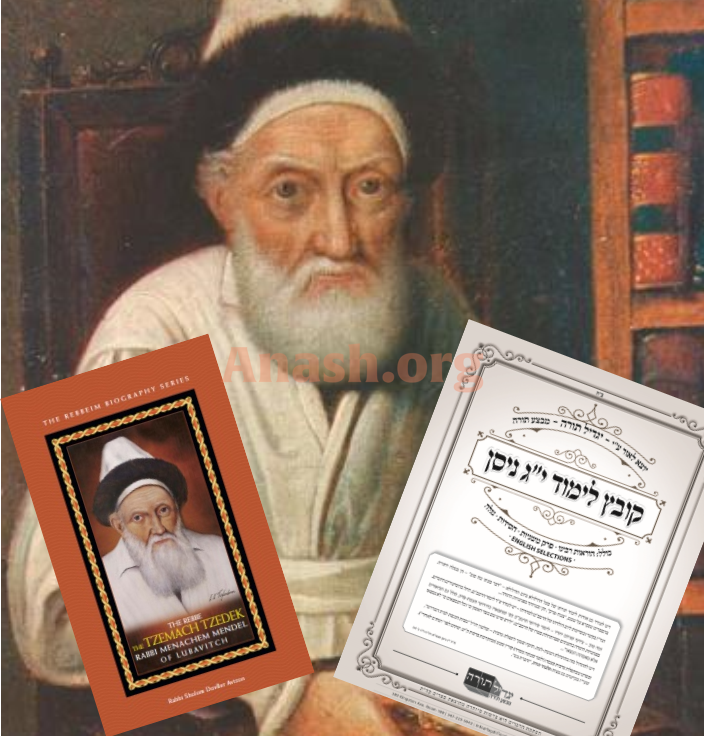 Today, Yud Gimmel Nissan, is the 153rd yahrtzeit of the Tzemach Tzedek. Read about the histalkus and learn mishnayos and select Torah teachings in Hebrew and English.

The following is an excerpt of two chapters from The Rebbeim Biography Series vol. 3 – The Rebbe the Tzemach Tzedek, written by Rabbi Sholom DovBer Avtzon. Reprinted with his permission and our thanks and appreciation for this important work.

Shortly before Chanukah, 5620 (1859), it became noticeable that the Rebbe the Tzemach Tzedek was becoming weak and could no longer travel to various chassidic communities in Russia and Ukraine as before. Originally it was attributed to the fact that the Rebbe was now seventy years old [and just feeling his age]. People assumed it was nothing to be overly concerned about.

Nevertheless, the fact that these chassidim could no longer receive the Rebbe’s brochos or hear his maamorim was disheartening to them. For many, the extreme poverty that engulfed them made it extremely difficult to travel to Lubavitch to see the Rebbe. How fortunate they had been up to now that the Rebbe would occasionally travel to various cities, making it so much easier to see him. They took full advantage of those opportunities to hear his maamorim, present their questions to him, and beseech him for a brochah.

But now that the Rebbe couldn’t travel anymore, what were they to do? How could they retain their hiskashrus (connection) and receive his guidance and brochos? After much thought, many of them requested that the Rebbe send one of his illustrious sons instead as he had done periodically until then. To this, the Rebbe readily agreed.

So now, the sons would travel frequently to various cities and say or review a maamar Chassidus, each in his own style. In addition, as previously noted, the Tzemach Tzedek had bestowed on each of them the ability to accept chassidim in yechidus and give brochos.

At the beginning of the following year, 5621 (1860), his wife Rebbetzin Chaya Mushka became ill. At the end of the month of Cheshvon, she was so weak that one of her daughters, [daughters-in-law or granddaughters] would stay with her at night in case she needed any help.

Over the next few weeks, her strength weakened and her health deteriorated. On Friday of Parshas Vayigash, Ches Teves, she was niftar and was buried that day in Lubavitch.

Immediately after her petirah, chassidim began to see certain changes in the Rebbe’s relationship to them. He minimized the number of people he accepted in yechidus and did not always answer the letters he received. He explained this change by saying, “I can only answer the questions concerning one’s service to Hashem, but not inquiries relating to material matters, for now, I only see the spiritual aspect of everything.”

When the chassidim bemoaned  the fact that they were no longer able to ask his advice and didn’t know what they were supposed to do, the Rebbe answered, “You have my sons [who will guide and help you]. Additionally, when chassidim are united, [they have the ability to overcome all obstacles].”

Since his youngest son, the [Rebbe] Maharash, and his family had been living in his father’s house for the past few years, the Tzemach Tzedek asked him to remain there with his family. The [Rebbe] Maharash’s wife, Rebbetzin Rivkah, would officially take over the household responsibilities.

However, there was a deeper reason why he asked the Maharash to remain there, a reason that was concealed from the other sons. Three or four times a week — at night in the winter and early morning in the summer (when no one would realize) — the Tzemach Tzedek taught him privately for four hours at each sitting. The Rebbe kept this arrangement a secret in order to avoid any jealousy among his other sons.

Privately, he also told the [Rebbe] Maharash how the Alter Rebbe had made peace between him and the Maharash’s mother, his Rebbetzin, 54 years before. Their distance had come about after she had given his manuscripts on Shoresh Mitzvas HaTefillah to their grandfather, the Alter Rebbe. The Tzemach Tzedek said, “When we entered grandfather’s [the Alter Rebbe’s] room and thanked him for restoring the peace [between us], he blessed us.”

The Tzemach Tzedek then continued, “Now I understand why our (my and your mother’s) grandfather, the Rebbe, gave a deep sigh when he concluded his blessing that ‘our beautiful plants (i.e., our children) will grow and blossom, and it (i.e., your wife) will be harvested from you.’ The [Hebrew word for ‘harvest’ is neid and its] numerical value is 54. It is now 54 years [almost to the day] since we received the brochah, [and now she was taken (harvested) from me].”

At that time, the chassidim realized that the Rebbe was not merely becoming weaker, he was actually ill. As his brother-in-law Reb Menachem Nochum lamented, “Who would believe that the Tzemach Tzedek — a man so hardy that he would fast for entire weeks at a time, day after day, and then break his fast with a bit of bread and chicory; a man who for many years would sleep only three hours a day — would be so ill and suffer so much pain for five years?”

Notwithstanding his pain and weakness, the Tzemach Tzedek remained extremely involved in the upbringing of his grandchildren. They were to come to him once a week to be tested. This applied to all of them, especially his four (or five-) year-old grandson Sholom DovBer (the [Rebbe] Rashab), whom he showed a special interest in and informed the boy’s father, the [Rebbe] Maharash, that this son of his would eventually become Rebbe [after him].

As the months progressed and his voice became weaker, it was increasingly difficult to hear the maamorim he was saying. The Tzemach Tzedek recognized this and decided to write out the maamar he was planning to say that Shabbos. By making it available to the chassidim, they were able to make many copies to distribute to the crowd before Shabbos. This way it would be easier for them to follow and understand what he was saying.

In addition, although it was difficult for him to sit up for extended periods of time, he continued accepting chassidim in yechidus. He instructed his gabba’im to bring pillows and place them next to him so they would give him the support he needed to sit up. Always the faithful shepherd, he guided and blessed people in yechidus until his final days.

Sometime around Tishrei of 5626 (1865), the Rebbe the Tzemach Tzedek began to call his son the [Rebbe] Maharash into his room for a few moments every day. In the privacy of his study, he would read to him the Midrash on the possuk, “And Yosef passed away, [as did] all his brothers, and their entire generation. The Midrash says,” concluded the Tzemach Tzedek, “even so, their G-d did not die.”

In his father’s presence, he did not display any emotion. But as soon as the [Rebbe] Maharash entered his adjacent apartment, he would burst into tears. He was no longer able to restrain his grief. He understood all too well to what his father was hinting, [that not only would his father shortly pass away, but that he (the Maharash) would be the one who should continue teaching and spreading the awareness and knowledge of G-dliness (i.e., Chassidus).

Around that time, the Tzemach Tzedek wrote him a note instructing him to say his own Chassidus in Lubavitch and added, “The chassidim will listen to you just as they listened to me.” While all the sons were instructed to say Chassidus when they traveled to other cities and could have said their original thoughts then, no one was given permission to say his own Chassidus in Lubavitch until now. They would merely review the maamar their father had said and add an explanation when they realized that those listening did not understand it.

The Tzemach Tzedek also wrote his tzavaah (Will) sometime during this time period. One of the things he stipulated is that after his histalkus, no one should move into his house or use any of the rooms for their personal use, instructing that the entire house be utilized for a shul or study hall.

The chossid Reb Zalman Ber, a sofer from the city of Beshenkovitz, was the last person to merit having a yechidus with the Rebbe the Tzemach Tzedek. It was on Tuesday evening, Yud-Alef Nissan. He relates what happened during those final days.

As I left the Rebbe’s yechidus room, I heard someone saying that the Rebbe was not feeling well. The doctor was called and came immediately. After examining him, he said that the Rebbe’s situation was stable. There was no reason for alarm as the Rebbe’s health had not deteriorated since [the doctor] had last seen him some time before.

However, the following morning, when the chassidim saw that his health had not improved, they were concerned. They decided to recite Tehillim the entire day and added the name Meir to the Rebbe’s name.

That evening they noticed a slight improvement in the Rebbe’s condition. This raised their hopes that the Rebbe was recovering. But as the night progressed, they realized that they were mistaken.