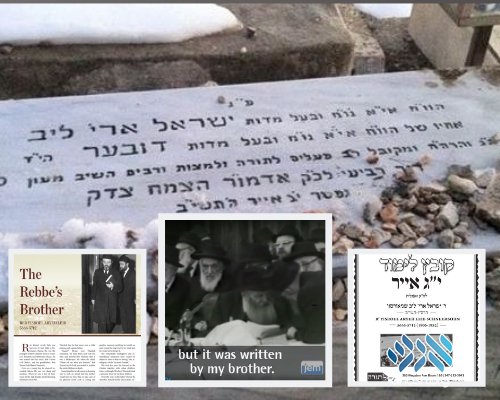 Yud Gimmel Iyar is the yahrtzeit of the Rebbe’s youngest brother R’ Yisroel Aryeh Leib. We present a collection of sichos, interactions, and publications.

Yud Gimmel Iyar is the yahrtzeit of the Rebbe’s youngest brother R’ Yisroel Aryeh Leib, who passed away in 5712/1952. Over the years there were several times when the deep connection between the Rebbe and his brother was out in the open for all to see. The Rebbe assisted in initiating and coordinating various projects in his memory. On Yud Gimmel Iyar, 5751 the Rebbe spoke an entire sicha expounding on the name of the ba’al ha’yahrtzeit.

The Rebbe tells Professor Paul Rosenbloom: “I had a younger brother who passed away many years ago. He left this unfinished mathematical paper. If you will supervise someone to prepare it for publication, I will be very happy to pay for it.” (you can read the background to this conversation as well as letters from the Rebbe following up, in pg. 4-5 of the Derher article below.)

Listen to an audio version on the Ashreinu app here.

What’s in a Name?

At a farbrengen on 14 Iyar, the Rebbe explains the meaning of the name Yisroel Aryeh Leib.

Listen to an audio version on the Ashreinu app here.