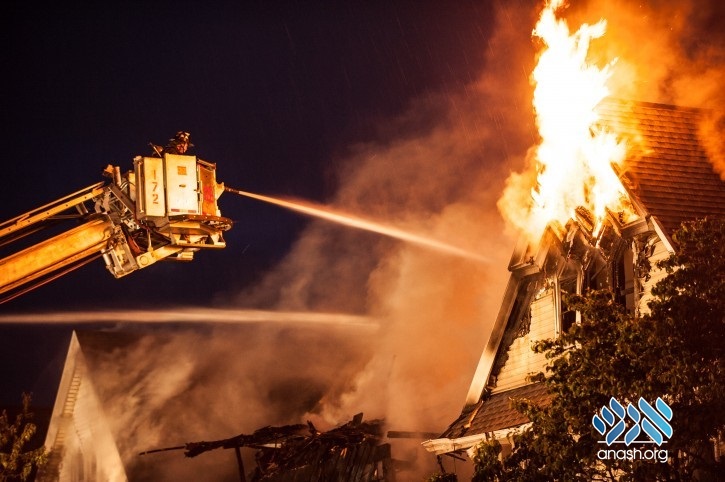 A massive fire in the Midwood section of Brooklyn torched at least three buildings early Thursday morning, injuring at least 12 people, including a baby.

The fire broke out just after 4 AM on E17th Street near Avenue O at the two-family home of Rabbi Jonathan Max, and quickly jumped to both neighboring houses.

“There is no question that everyone is alive today because the houses had working smoke detectors,” Misaskim director Yanky Meyer told VIN News.  “There were only seconds for people to be able to get out here. There were no minutes.”

Meyer said that a family with a six week old baby was trapped in the attic in one of the adjacent homes as the fire raged on the stairs, their only exit.  The family was evacuated by the fire department who used a ladder truck to extricate them from the burning building.

Video from the E. 17th Street scene showed flames leaping from the roof of one home, and the structure to its left already little more than a charred hulk. Firefighters reported that two roofs had completely collapsed.

While Investigators are tight lipped, Sources told VIN news the fire is believed to have been set by a man, who has a history of instability and has a long standing grudge against Rabbi Max, a teacher at Yeshiva Rabbi Chaim Berlin served as the high school dorm counselor for many years.

An accelerant is believed to have been used in the fire with raw video footage showing the massive blaze erupting in a matter of seconds.

In a press conference held this morning, Fire Chief Thomas Richardson said that it took less than five minutes for the FDNY to respond to the fire, with all three homes already engulfed by the time fire crews arrived on scene.  The fire was upgraded to a three alarm fire within five minutes, with 40 fire units, 25 EMS members and 170 firefighters keeping the flames from spreading to additional homes.  The fire was upgraded to a four alarm fire before it was finally brought under control after 7 AM this morning.

Rabbi Max’s home sustained serious damage, with an extensive collapse of both the roof and the upper floor, according to Chief Richardson.  The rooms of both of the adjacent homes also sustained partial collapses.

Three adults, a baby and one firefighter were all hospitalized for minor injuries and/or smoke inhalation. All are in stable condition.

An investigation by fire marshals is ongoing.