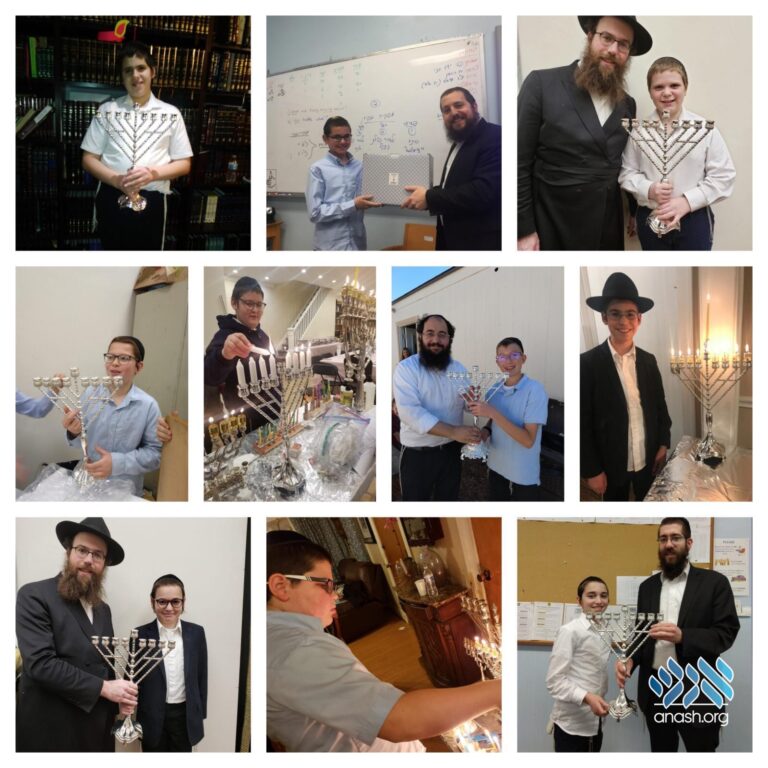 Ten hard-working boys from 10 Lubavitch mosdos around the country were the recent lucky winners of magnificent Rambam-style silver-plated Menorahs. The Menorah prizes were part of the monthly raffles held for the Gemara Bifnim project, a unique initiative of Crown Heights-based Igud Hamelamdim.

The Gemarah Bifnim program, launched in 2017, has garnered an enthusiastic response during its programming over the last two school years of 5778 and 5779 (2017-2019). Following its success in sixth grades across the USA and Canada, the program has now expanded to seventh grade.

“While being able to read the Gemara inside is assumed to be basic to learning Gemara,” explains Rabbi Avrohom Bluming, director of Igud Hamelamdim, “the reality is that it is becoming a growing challenge. Children nowadays are finding it ever more challenging to focus on words on a page, and it really hits them hard when they enter yeshiva.”

It’s not a memory game, it’s not about remembering the conversation or storyline – “It’s about looking inside the Gemara to see which words mean this, and who is this referring to, and how do you know that. These skills are the key to knowing how to learn Gemara independently anywhere in the world, at any time. This is what we are focusing on instilling, with the Gemarah B’fnim Program.”

The current Chinuch landscape is inundated with extracurricular programming, encouraging students to excel in baal peh, in mivtzoyim, and in Darkei Hachassidus. The achievements gained in these areas are astounding.

To match that enthusiasm within the classroom itself, Igud Hamelamdim came up with a revolutionary way to give children these fundamental skills in an exciting manner. Gemara Bifnim was created as a positive program that would not only encourage proper Gemara study, but also make it tantalizing.

Rabbi Yehuda Leib Aronson, who directs the program reports, “The success is outstanding! We are at the fifth test, and we have over 18,000 minutes learned over the phone and over 700 boys brought Shabbos slips that they learned that weeks’ Gemara with their father!”

We congratulate the following 10 Menorah Winners:

As we write, another monthly raffle is taking place, in which the winners will receive store credit with which to buy Seforim for Hei Teves.

We wish the Talmidim continuous Hatzlacha in their Learning Bifnim!

To view more about this program, visit IgudHamelamdim.org